Posted on May 28, 2019 in
Human Rights, Obstacle To Development, Policy

Chairman of the Conservative People’s Party of Estonia (EKRE) parliamentary group Siim Pohlak submitted a bill on behalf of the ruling three-party coalition to the Estonian parliament, the Riigikogu, that would lower the excise duty on strong alcohol, beer and cider in Estonia by 25% as of July 1…

The chairman of the Conservative People’s Party of Estonia (EKRE) parliamentary group Siim Pohlak submitted a bill on behalf of the ruling three-party coalition to the Estonian parliament, the Riigikogu, that would lower the excise duty on strong alcohol, beer and cider by 25% as of July 1.

The far-right populist and xenophobic party EKRE won 17.8% of the vote in Estonia’s March elections, doubling its vote and coming in third to eventually become a coalition party of the new government.

As part of its negotiations on the next state budget strategy and the 2020 state budget, the government decided to reduce the alcohol excise duty on both spirits and low alcohol by volume (ABV) beverages by 25% as of July 1. The reason stated is to curb cross-border trade on Estonia’s southern border.

However, tax cuts will likely increase cross-border trade for Finland causing an increase in problems of alcohol consumption for the Estonian neighbor.

Big Alcohol groups are rejoicing with the news while commending the move by the Estonian government. 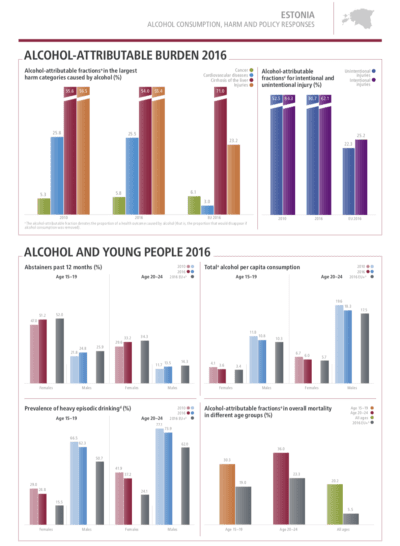 Estonia has been faced with rampant alcohol problems. In recent years, the country emerged as European and global leader in implementing evidence-based alcohol policy best buy measures, including alcohol taxation, to tackle its massive alcohol issues. This new move to reduce taxes will inevitably undermine the progress made in recent years on reducing alcohol consumption and related problems.

The decision to cut alcohol taxes is specially worrying considering the alcohol harm prevalent in Estonia. WHO reports, total alcohol consumption for both males and females are higher in Estonia than in the European region. Levels of alcohol consumption and related harm are immense but have been reducing in recent years, due to government policy implementing the WHO best buy alcohol policy solutions.

As per the new WHO country profile, the alcohol burden was just beginning to decline, but now with tax cuts, this progress is likely jeopardized.