A new report by WHO Europe finds that alcohol consumption in Russia has fallen by 43% since 2003. This decrease has led to a historic peak in life expectancy of Russians. 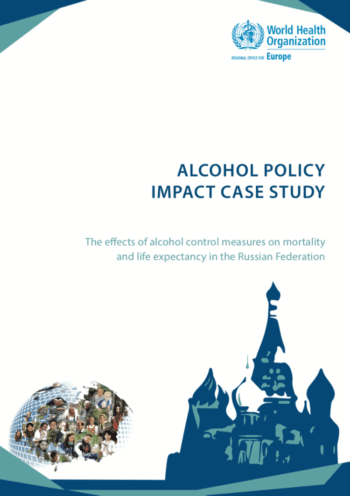 This trend mirrored a drop in all-cause mortality by 39% in men and 36% in women between 2003 and 2018, with the sharpest decline in causes of death linked to alcohol consumption.

This helped average life expectancy in the Russian Federation reach a historic high in 2018, at almost 68 years for men and 78 years for women.

As The Guardian reports, previous WHO data show that Russia is now consuming less alcohol than Germany and France.

In 2011, the Russian Federation supported the adoption of WHO’s European Action Plan to Reduce the Harmful Use of Alcohol 2012–2020. Since then Russia has been implementing many of the recommended policies in the plan. These include the alcohol policy best buys recommended by WHO as the most cost effective measures to reduce alcohol harm.

The dramatic decline in consumption of homemade, smuggled or illegally produced alcohol in the Russian Federation is attributable to the government’s adoption of evidence-based alcohol control policies. These results show that measures such as the introduction of monitoring systems, price increases and limited alcohol availability work to save lives and health system costs…,” said Carina Ferreira-Borges, Programme Manager, Alcohol and Illicit Drugs, WHO/Europe, as per WHO Europe News.

As Dr Bente Mikkelsen, Director of the Division of Noncommunicable Diseases and Promoting Health through the Life-course, says policies such as implemented by Russia help to reduce the NCD burden and plays a part in achieving the SDG goal 3.4 on reducing premature death by NCDs by 30% by 2030.

The Ministry of Health of the Russian Federation has announced that it will increase the minimum legal age for purchasing alcoholic beverages with a strength of 28% and above to 21 – a measure strongly supported by WHO as it helps protect young people from alcohol and its harms. There is ample evidence on the relationship between young age of alcohol use initiation and higher risks of alcohol use disorders later in life. Therefore, raising the minimum age is a very important step in creating an environment free of alcohol-related harm.

Highlights of the report

If Russia keeps implementing and enforcing effective and evidence-based alcohol control measures, mortality will keep decreasing. There is still a lot of room for improvement in reducing mortality from cardiovascular diseases as they are hugely impacted by alcohol consumption patterns at the population level, most importantly heavy episodic alcohol use that is still common in Russia.

If Russia will stop implementing alcohol policy, trends will reverse very quickly and mortality will rise steeply again. As the Russian history shows – there were such alcohol-related fluctuations in mortality before and their magnitude was very large.

Lessons for other countries

The Russian case provides strong arguments that alcohol control works. By employing high-impact, evidence-based alcohol control policies, one of the heaviest alcohol consuming countries of the world with the globally highest alcohol-attributable burden could reverse the most worrisome trends within a relatively short period of time.

For other countries this means: alcohol control policy saves lives.

There are a number of policies that were identified by the WHO as cost-effective in reducing alcohol consumption and mortality:

In Russia, various measures in all of these three areas were taken. This shows other countries that the alcohol policy best buys do work and that an integrated approach is very fruitful.

Other countries should specifically not shy away from increasing prices on alcohol as this is one of the least implemented policies in the WHO EURO region. The Russian case provides clear empirical evidence in this regard: the less affordable alcohol is, the less it is consumed at the population level,” says WHO Europe, per an FAQ document.