In Japan there is an age old pervasive alcohol norm. This has been harming the Japanese people, and leading to high alcohol consumption. Japan’s alcohol norm pushes people to use alcohol in everyday settings, at work with their superiors and leads to intoxicated people being passed out in the streets. Alcohol has been associated with building relationships both personal and business…

In Japan there is an age old pervasive alcohol norm. This norm has been harming the Japanese people, by fueling high levels of alcohol consumption.

Japan’s alcohol norm pushes people to use alcohol in everyday settings, at work with their superiors and leads to intoxicated people being passed out in the streets. Alcohol has been associated with building relationships both personal and business.

One reason for this alcohol norm to continue is the high availability of alcohol in the country. Alcohol is sold in almost all convenience stores which are open at all hours. Laws are weak leading to alcohol being available for immediate consumption at any event or establishment.

There are even vending machines selling alcohol. These machines can’t verify age for sure and even convenience store cashiers don’t check ID always. So, despite having a legal age of alcohol use of 20 years, the law is not always implemented.

It is common to see alcohol use in all public places, parks, beaches and even on public transport.

This harmful norm has pervaded the work culture so much so that people are pressured into using alcohol in fear of insulting their colleagues or superiors.

The alcohol norm has pervaded the country to the extent that Japan topped the list of countries most accepting of alcohol in a 2013 survey by Pew Research Center as part of their Global Attitudes Project.

Consequences of the pervasive alcohol norm

The alcohol norm means people don’t talk about the harm from alcohol. But facts and statistics show Japanese people are suffering under the burden of alcohol. 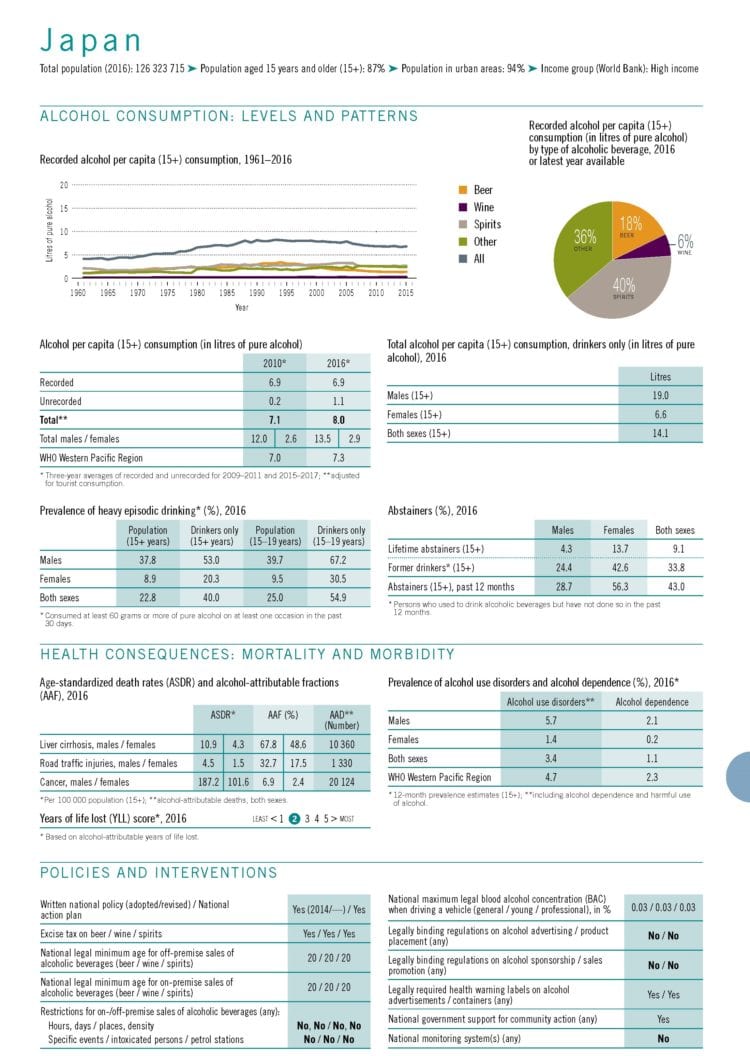 Japan’s total per capita alcohol consumption as reported by WHO is 8 litres which is higher than the average for the WHO Western-Pacific region. The trend of consumption is increasing in the country. Per capita consumption of male alcohol users is at 19 liters per year, among the highest rates in the world. More than two thirds of young alcohol users engage in heavy episodic alcohol use. More than 20,000 cancer deaths are attributable to alcohol in Japan.

Japan while having a national alcohol control policy needs to take urgent action to make sure it is being implemented effectively at the ground level. Introducing restrictions on sales, alcohol promotions, advertising and sponsorship of alcohol, in line with WHO recommendations, would also go a long way in reducing the harm suffered by Japanese people due to alcohol.

It is also important to increase awareness of the people on alcohol and its addictive nature. There is also an urgent need for support services to people who are suffering from alcohol abuse as currently the topic is highly taboo and goes unnoticed.