Youth in Cambodia have mobilized to campaign against online alcohol ads. A group of youth launched a social media campaign against posts that advertise alcohol consumption. The group says such advertising exhibited a lack of dignity and set a bad example for younger generations…

Youth in Cambodia have mobilized to campaign against online alcohol advertising.

A group of youth launched a social media campaign against posts that advertise alcohol consumption. The group says such advertising exhibited a lack of dignity and set a bad example for the younger generations.

According to Kung Raiya, the leader of the campaign, it was launched because there was a rise in Facebook users who unknowingly advertise alcohol by posting about their alcohol consumption.

To preserve your dignity, please don’t post alcoholic [beverages] on social media when you [consume alcohol] as it equates to teaching children about this vice,” read one of the posts of the campaign, as per The Phnom Penh Post.

Eang Phearanh a participant of the campaign urged all to share the campaign messages on their Facebook timelines and to stop sharing posts related to alcohol consumption.

Another aim of the campaign is to urge the relevant government ministries to advance its approval of the law on alcohol regulation.

If the government does not act now, alcoholic drinks will continue to be sold, consumed and advertised widely, which will lower our standards of proper conduct and morality,” said another campaign post, as per, The Phnom Penh Post.

State of alcohol laws in Cambodia

Cambodia currently has no laws on alcohol sales regulations, this is making alcohol consumption more pervasive in the country according to Raiya. Recently, the Ministry of Commerce of Cambodia met with the Supreme Consultative Council to discuss introducing a sub-decree to regulate advertising of alcoholic products.

The Ministry of Health started the process of drafting a law to prevent and reduce alcohol harm by reducing alcohol consumption, in 2015.

The approval of the draft “Law on Alcohol Regulation”, which consists of some 39 articles and 11 chapters, had been delayed at the Ministry of Health although it had already been discussed and approved by inter-ministerial institutions in 2015.

While expressing support for the campaign, government spokesman Phay Siphan said the Council of Ministers will soon hold a meeting to discuss the draft law. However, he did not specify a date.

This law had already been integrated with the Ministry of Commerce’s food regulation. But I have yet to receive information on when it will be approved and promulgated,” said Pich Sros, member of the Supreme Council for Consultation and Recommendations, as per, The Phnom Penh Post. 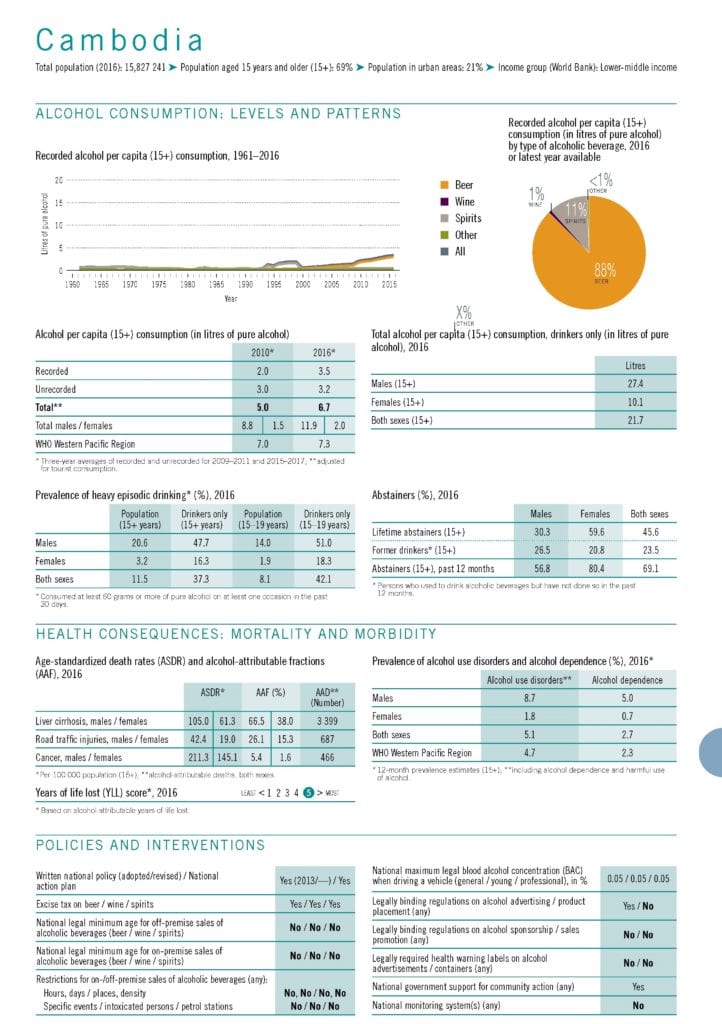 In Cambodia, youth alcohol use is problematic where over half (51%) of male youth between 15 to 19 years who consume alcohol binge on it. The negative health consequences are grave, placing Cambodia among the highest in years of life lost due to alcohol.

The current alcohol policy in Cambodia contains vast gaps in regulating alcohol availability and alcohol marketing. As statistics show, improved alcohol policy is an urgent need for the country.