Poland has alcohol marketing restrictions in place intended to effectively limit alcohol advertising, promotions and sponsorship but challenges are posed due to self-regulation by the alcohol industry.

For example, in one case, a liquor store in Krakow was found to have displayed strong alcoholic beverages on their shop window in a way that the trademark is seen from outside. This was considered a violation of the Act and the shop owner’s permit to sell alcohol was withdrawn by the authority.

The appeal for the case reached the Supreme Administrative Court. The Court upheld the initial decision stating it was irrelevant if the owner wanted to popularize alcohol; the only relevant issue was whether displaying trademarks popularized it. The Court also stated this violation constituted the legal grounds for withdrawal of permit.

However, in another case, a grocery store chain had printed a leaflet on a “buy more pay less” offer for Carlsberg beer. The leaflet said “Carlsberg beer can be purchased at a price of PLN 2.39 per bottle if the customer purchases at least 3 bottles. For smaller purchases, the price is PLN 2.99.” A case was filed against this advertising with the self-regulatory body – Committee for Ethics in Advertising (the Committee). The basis for the complaint was that this type of advertising incentivizes heavy alcohol use.

The accused seller submitted a reply in which he denied all allegations, emphasized that the advertisement certainly did not violate the law and was not contrary to decency or the principles of fair competition. The Committee fully accepted the position of the seller and dismissed the complaint. This decision can be exploited by the alcohol industry to avoid negative consequences for promotional campaigns while violating alcohol advertising regulations in Poland.

These examples illustrate the flaws and pitfalls of a self-regulatory approach to alcohol advertising, sponsorship and promotions.

Data from the World Health Organization shows that alcohol consumption in Poland is not declining, despite the government’s 2013 voluntarily commitment to reduce per capita alcohol use by 10% until 2025.

The last time the national alcohol policy was reviewed was in 2016 and there is currently no national action plan. But the alcohol burden is high in Poland.

In terms of years of life lost due to alcohol, Poland ranks among the top countries in the world. 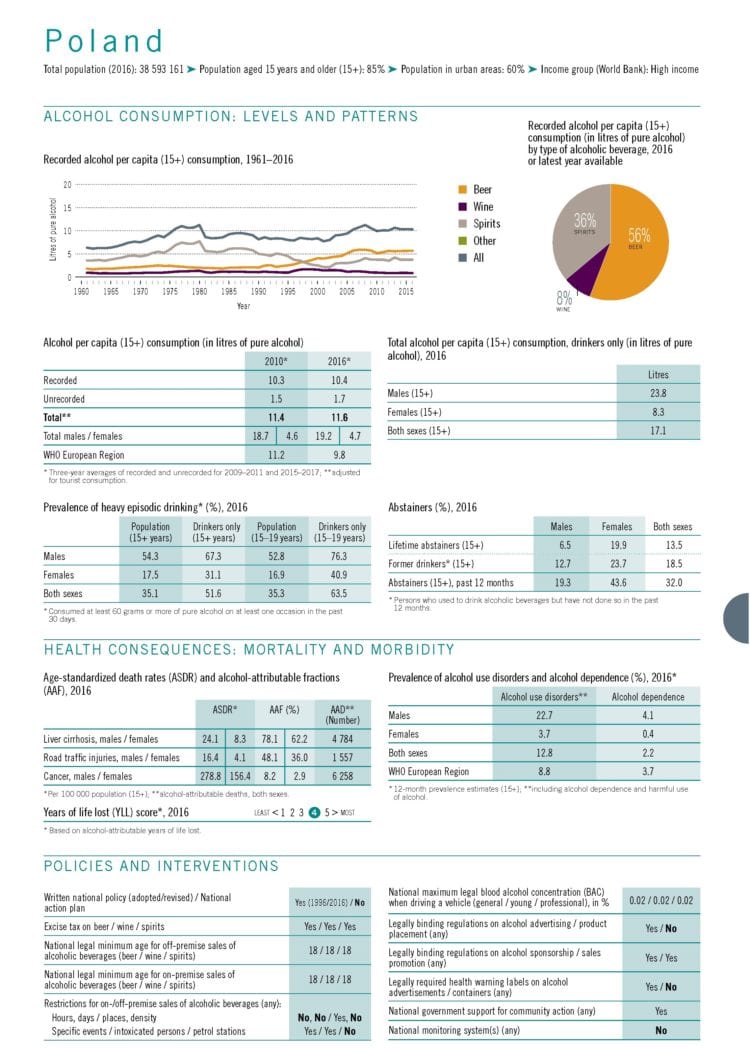 In Poland, according to WHO data, more than 6,000 cancer deaths are due to alcohol and more than 4,700 deaths from liver cirrhosis are from alcohol. 22.7% of the male population has an alcohol use disorder.

It is clear that Poland needs to improve its alcohol marketing regulations, end alcohol industry self-regulation and adopt a modern, evidence-based approach to alcohol policy-making, as recommended by the WHO, for example in the SAFER technical package.