Posted on May 9, 2020 in
Alcohol Industry, Alcohol's Harm To Others, Corporate Consumption Complex, Obstacle To Development, Prevention, Sustainable Development, Well-being

A battle for booze has ensured in Pakistan amidst Ramadan and COVID-19 lockdown. A majority Muslim country, Pakistan does not allow consumption of alcohol for Muslims due to religious reasons. Regulations are specifically tightened during Ramadan season a holy month for Muslims…

A battle for booze has ensured in Pakistan amidst Ramadan and the COVID-19 lockdown.

A majority Muslim country, Pakistan does not allow consumption of alcohol for Muslims due to religious reasons. Regulations are specifically tightened during Ramadan season, a holy month for Muslims. The liquor shops in Pakistan which are open to sell alcohol to non-Muslims and foreigners are also closed during the Ramadan season. The largest legal supplier of alcohol in the country is the Murree Brewery. 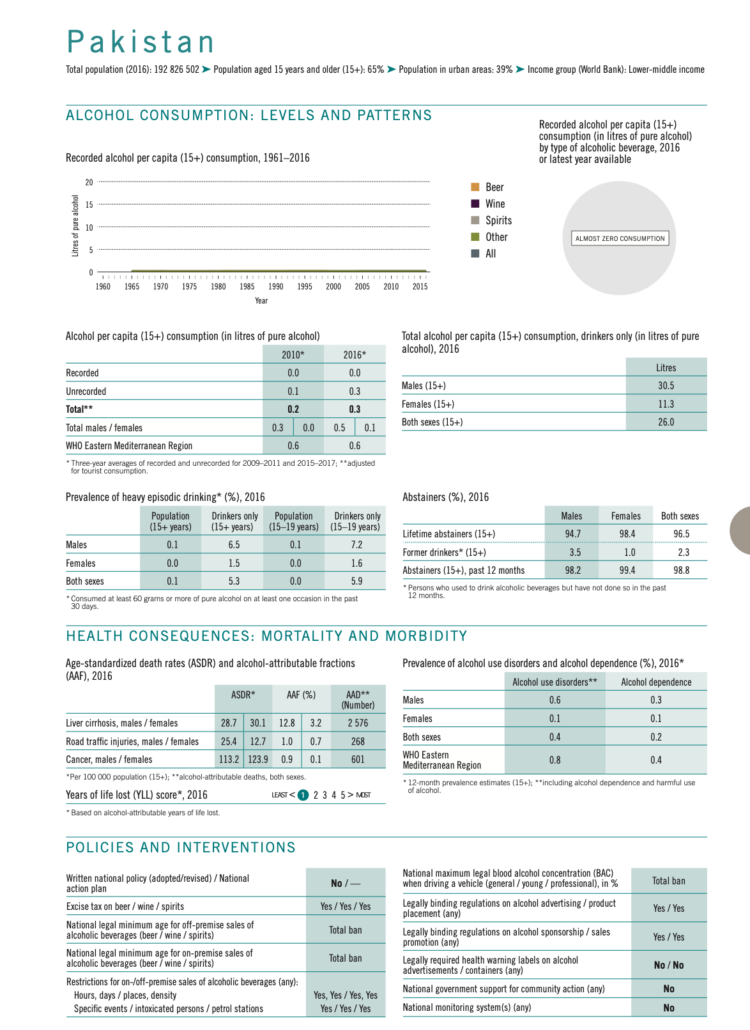 As the World Health Organization shows in its 2018 Global Alcohol Status Report, alcohol consumption is almost zero in Pakistan. In any given year, almost 99% of Pakistani adults are alcohol abstainers, with 96.5% being lifetime abstainers. The prevalence of alcohol use disorders in Pakistan is lower than the average of the WHO Eastern Mediterranean Region. All that means that Pakistan ranks lowest on the scale of years of life lost due to alcohol.

Nevertheless, the few adults – mainly men – consuming alcohol do so at heavy and hazardous levels. Some people circumvent the country’s alcohol policy rules and regulations, even during Ramadan. Among males who consume alcohol, per capita alcohol intake amounts to more than 30 liters of pure alcohol per year. 0.6% of Pakistani males have an alcohol use disorder and liver cirrhosis deaths due to alcohol amount to 2576 per year.

While the vast majority abstains from alcohol consumption, there are some Pakistani who engage in alcohol use and likely have a disorder or even dependence. They consume alcohol despite the policy and religious rules and regulations, even during Ramadan.

However, with COVID-19 alcohol availability has become more scarce.

But alcohol businesses are attempting to take advantage of this situation. Those who have stocked up alcohol are selling alcoholic beverages at very high prices to supply those in need of alcohol. For instance, imported whisky is costing $100 during the lockdown and the current Ramadan season, compared to $60 during the same period in 2019.

At the same time there is illicit alcohol production. This type of illegally produced bootleg alcohol has already killed 29 people in Pakistan according to an agency tally. Senior police officials say that underground sales of liquor still persist despite the lockdown restrictions of the government. It’s difficult to enforce laws on these sales as the majority of the consumers belong to the elite of Pakistan’s society.

Busting Pakistan’s liquor market is quite a task as the elite of the country makes up the essential consumers,” said the police official, as per Quantara.de.

The World Health Organization has specifically advised people to avoid alcohol consumption during lockdown. Following are some reasons why alcohol should be avoided, specifically during COVID-19:

Pakistani society needs to promote greater awareness about the harms of alcohol during COVID-19 and also address the myth of alcohol killing corona virus which may lead to people consuming alcohol and dying.

Myths and Truths About Alcohol and COVID-19