Alcohol is high in kilojoules, with a pint of beer almost on par with a chocolate bar in terms of energy content. That means that even relatively small levels of alcohol consumption can have a big impact on daily energy intake. Increasing the price of alcohol is the most value for money policy option to prevent obesity in Australia. By preventing obesity-related diseases, this policy would save about A$4.8 billion in health-care costs…

Obesity has serious health consequences, and a substantial economic impact on Australia. ACE-Obesity Policy is a priority-setting study that aimed to evaluate the economic credentials of a range of obesity prevention policies (including both regulatory and program-based interventions), across multiple sectors and multiple areas of governance (local, state and federal governments, and the private sector).

The study formed part of the broader body of work of the National Health and Medical Research Council funded Centre of Research Excellence in Obesity Policy and Food Systems (APP1041020: 2012-2018), and answered the research question:

What are the most effective, cost-effective, affordable and implementable policy options to prevent obesity across a range of settings?”

The current obesity epidemic in Australia and around the globe has significant negative health and economic consequences. Addressing this problem will require a comprehensive societal response, including implementation of a suite of multi-sectoral government policies. Informed government action requires reliable comparative evidence on the costs and benefits of various policy options.

The Assessing Cost-Effectiveness (ACE) approach was adopted – characterised by the use of consistent, rigorous methods for the technical cost-effectiveness analyses (including extensive uncertainty analyses), alongside qualitative analyses of key implementation considerations relevant to policy decisions (strength of evidence, equity, acceptability, feasibility, and sustainability). The modelling of expected health benefits and related costs in response to an intervention was based on a previously developed proportional, multi-state, life table Markov model.

Key advancements made to the model as part of the ACE-Obesity Policy study included:

Intervention selection was based on a deliberative process that included consideration of:

An intervention to increase the price of alcohol through a uniform volumetric tax performed best in terms of its cost-effectiveness credentials and health benefits.

This intervention has not previously been evaluated as an obesity prevention measure.

[I]ncreasing the price of alcohol is the most value for money policy option to prevent obesity in Australia,” the scientists write in The Conversation.

The study shows if we increase alcohol taxes by standardising them across different types of alcohol, overall alcohol consumption would go down. This would lead to substantial reductions in the kilojoules Australians consume each day.

In 2016-17, Australians [consumed] 186 million litres of pure alcohol – equivalent to more than nine litres for each person over the age of 15 years.”

Alcohol is high in kilojoules, with a pint of beer almost on par with a chocolate bar in terms of energy content. That mean that even relatively small levels of alcohol consumption can have a big impact on daily energy intake.

Scientific evidence shows that alcohol taxation is a best buy to reduce alcohol consumption by increasing the price.

Our modelling showed that the proposed new tax regime would, on average, result in a 16% reduction in alcohol consumption across the population. This would lead to average weight loss of around 0.7kg,” the researchers write in The Conversation.

When this is modelled over the lifetime of the whole population, the health impact is substantial. It is estimated that this tax change could prevent more than 190,000 cases of diabetes and 16,000 cases of cancer.

In total, the policy change could result in more than 470,000 healthy life years gained for the Australian population.

By preventing obesity-related diseases, this policy would save about A$4.8 billion in health-care costs.” 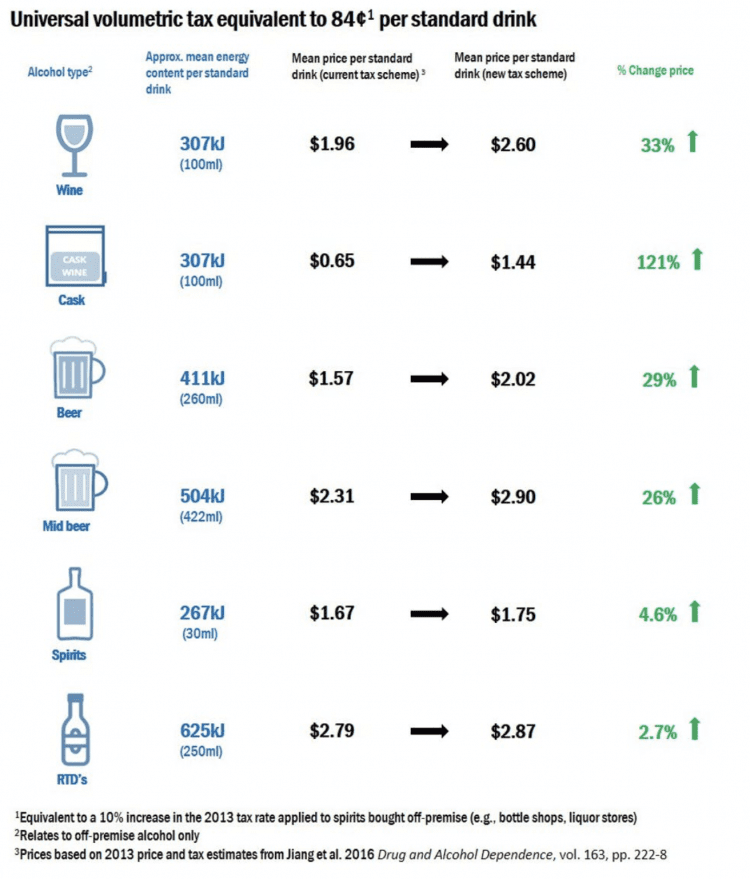 Regulations to tax sugar-sweetened beverages and restrict television advertising of unhealthy foods ranked second and third on the cost- effectiveness league table, and have both been recommended by authoritative obesity prevention reports and health promotion bodies as key components of an obesity prevention strategy.

This study is the first to evaluate the cost-effectiveness of several other promising obesity prevention interventions such as:

Effective action to prevent obesity will not be possible without strong governmental leadership and commitment. Challenges will arise from the following:

Despite these challenges, the great potential for substantial health benefits stemming from the obesity prevention interventions evaluated in this study can be used to garner a coalition of support for these policies.