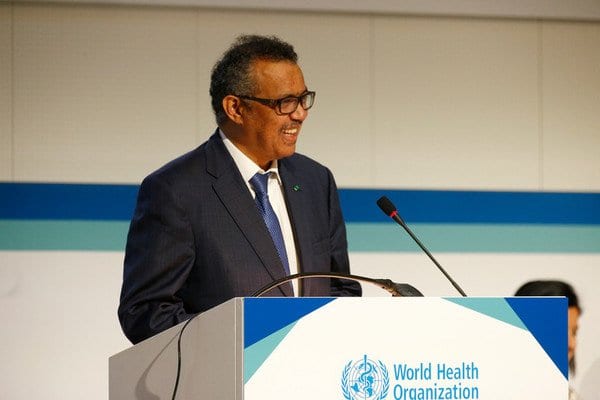 The alcohol burden and the need for prioritizing alcohol policy solutions to tackle pervasive alcohol harm in the European region were one of the key issues addressed, as deliberations commenced at the 69th WHO Europe Regional Committee Meeting.

WHO Director General Dr Tedros spoke in his opening remarks about the need to do more concerning a set of health challenges for the European region. The Director General of the World Health Organization emphasized that alcohol consumption and harm is a “significant challenge” and remains “unfinished business”.

Even the WHO Europe Regional Director and Health Ministers from member states emphasized the urgency of making alcohol policy the priority it should be.

Dr Tedros recognized the contribution of Health 2020, the European health policy framework, to improving health outcomes and reducing health inequities in the Region. He noted key areas – including the health of refugees and migrants and addressing antimicrobial resistance – where the Region has been at the forefront of global health efforts.

However the Director-General was clear that the Region must do more. He cited the following as “significant challenges” for the next Regional Director and European Member States:

No country can afford simply to sit back and treat the effects of tobacco use, harmful alcohol consumption and unvaccinated children. We must be relentless in our efforts to promote health and prevent disease.

This is the unfinished business of Health 2020, and you have to continue this work with determination,” said Dr Tedros, the Director General of the World Health Organization, as per WHO Europe.

Dr Tedros encouraged member states to commit to health literacy next year. He called on Member States to empower people to be active participants in their own health by equiping them with information to make healthy choices. In this regard, he cited the European roadmap for implementation of health literacy initiatives through the life course, to be discussed on Thursday this week, as an “excellent first step”.

Taking the floor at her final Regional Committee session as Regional Director, Dr Zsuzsanna Jakab reflected on progress in health and well-being over the past decade.

In her speech reporting on the “Health 2020” strategy, she also addressed the role of alcohol harm across the European region. In a brand new report, alcohol has been identified as major obstacle to health equity in the WHO European region. And according to the “Status report on alcohol consumption, harm and policy responses in 30 European countries 2019” there was no statistically significant decline in total alcohol per capita consumption between 2010 and 2016 and the observed decreases in heavy episodic alcohol use seem to have come to a halt. Further, over 290,000 people lose their life in Europe per year from alcohol-attributable causes, and the report urges stronger policy action by countries to help reduce the numbers.

Before the backdrop of these two brand new report findings, Dr Jakab highlighted the importance of making alcohol policy the priority it should be:

Even member states interventions addressed the alcohol burden across the region.

Lithuania welcomed the progress made in the European region on reducing mortality from non-communicable diseases. Lithuania’s minister of health Aurelijus Veryga also emphasized that more needs to be done on alcohol and tobacco harm. He expressed full support for scaling up the implementation of the best buys for making stronger efforts to live up to political commitments made at third High-Level Meeting on NCDs at the United Nations in September 2018.

The Netherlands also took the floor to express concerns about the stagnation in the reduction of alcohol use and related harm in the WHO European region.

Netherlands 🇳🇱
Highlights concerns about the stagnation in the reduction of alcohol use and harm in the @WHO_Europe region, in their #rc69cph statement in the reports of the regional director #AlcoholHarms #AlcPolPrio
👉🏽 👉🏽https://t.co/QvVTjIcAB8 pic.twitter.com/JfRb4NdJeV

The 69th session of the WHO Regional Committee for Europe (RC69)

Over 500 high-level representatives, including many health ministers from the 53 Member States of the WHO European Region, will review 10 years of public health progress, address remaining and new challenges and nominate a new Regional Director at the 69th session of the WHO Regional Committee for Europe in Copenhagen, Denmark, on September 16 to 19, 2019. Together with partners and civil society representatives – including IOGT International – they will mark the achievements of Health 2020, the European policy for health and well-being that has driven the Region’s efforts on health towards sustainable development.

We are at a turning point in the health status of the European Region marked by the completion of Health 2020. As we enter a new health decade, we can look back with pride at the progress achieved together, with longer and healthier life expectancy as significant impacts,” said Dr Zsuzsanna Jakab, WHO Regional Director for Europe, as per WHO Europe.

Health 2020 has been a forerunner of 2030’s Sustainable Development Goals, focusing on issues such as the right to health, universal health coverage, social determinants, equity, people-centred systems, well-being and resilience.

The last European Health Report acknowledges that a great deal has been achieved since Health 2020 was adopted in 2012. The proportion of countries in the Region with a comprehensive national health plan aligned with Health 2020 increased from 36.4% in 2010 to 62.7% in six years. This resulted in an increase in life expectancy and reductions in premature mortality. At the same time, smoking, alcohol, overweight and obesity, and under-vaccination are still hindering progress in some countries.

It is now time to fast-track our successes and address the remaining challenges that still hold back the most vulnerable from attaining their full health potential,” added Dr Zsuzsanna Jakab.