Posted on April 17, 2020 in
Alcohol's Harm To Others, Policy, Prevention, Social Justice, Well-being

Alcohol policy reforms in Russia yield positive results for the country by reducing alcohol consumption and related harm.
Russia used to hold the title for being one of the countries in the world with the highest alcohol consumption. Now the rank has fallen to 14th – on par with Germany and France. Twelve years ago Russian per capita alcohol use was about 15 litres per year. Now it has declined to about 10 litres…

Russia used to hold the title for being one of the countries in the world with the highest alcohol consumption. Now the rank has fallen to 14th – on par with Germany and France. Twelve years ago Russian per capita alcohol use was about 15 litres per year. Now it has declined to about 10 litres. What’s even better is that the consumption of strong alcohol, such as vodka, has decreased by 31%.

The reduced overall alcohol use has led to a variety of positive results for the country.

Since 2005, the Russian government has implemented sweeping alcohol restrictions to tackle the country’s alcohol problem. These include the following measures:

Russia’s health Ministry is also drafting legislation to raise the legal age for alcohol consumption from 18 to 21 years.

Alcohol harm in Russia is still pervasive, exerting a heavy toll on people, communities and society at large – even though the situation is improving. 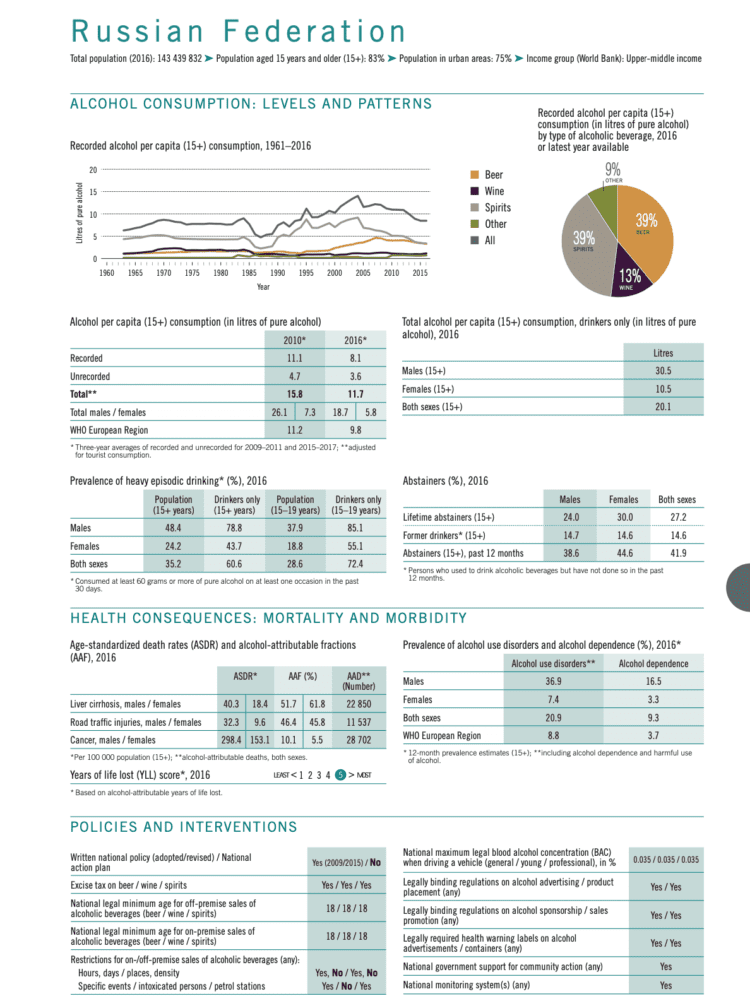 Data from the WHO Global Alcohol Status Report 2018 shows that Russia ranked among the leading countries for years of life lost due to alcohol – something that is slowly improving since 2016.

Alcohol use disorder (AUD) among the Russian population is off the charts with more than 20% struggling with an AUD, especially for men where more than one third of Russian men has an AUD.

In this context, it is very positive that Russia’s commitment to scientifically proven alcohol policy making is strong and consistent.

Russia is tackling issues of illegal alcohol and breaking the night-time sales ban by cracking down on those who break the law. Sober Russia is a group with volunteers who help the police to enforce laws controlling alcohol.

Four years ago, when we started, eight out of 10 stores in Moscow were selling illegal alcohol. Right now, it’s three out of 10,” said Grigoriev, a volunteer of Sober Russia, as per CBC.

Illegal alcohol has been a deadly problem for Russia. In one of the worst cases in recent times, 78 people died in the Siberian city of Irkutsk in 2016 after consuming illegally brewed alcohol.

The healthy alcohol-free lifestyle is also slowly taking hold in the country.

Increasingly there are initiatives and campaigns to promote the alcohol-free way of life, to support people to quit alcohol use and to encourage people to get treatment and support in overcoming alcohol use disorders. Furthermore, new projects emerge to support children and youth in delaying alcohol use onset.

“We are new Russians. We don’t [consume] alcohol,” said Sysoev and Forsenco, two filmmakers and alcohol prevention activists, as per CBC.