São Tomé und Príncipe is an island nation in the African region. Like most countries in the region also this island nation suffers from a heavy alcohol burden – to the extent that kids consume more alcohol than milk. The problem is that society lives in denial and rejects scientific findings about pervasive alcohol harm. Analysis also shows that shambolic state of alcohol policy development in the country…

São Tomé und Príncipe is an island nation in the African region. Like most countries in the region also this island nation suffers from a heavy alcohol burden – to the extent that kids consume more alcohol than milk.

The World Health Organization (WHO) has warned that the African region has an increasing alcohol consumption trend and is suffering from the resulting burden. For instance, wine consumption in Africa is growing five times as fast as the rest of the world. Alcohol is the fifth largest risk factor for death and serious health problems such as liver cirrhosis in sub-Saharan Africa. The increasing alcohol consumption has been driven by Big Alcohol who sees Africa as an emerging lucrative market.

Illegal, home-brewed alcohol is also a major problem for the region. This type of alcohol is sold very cheap and is widely available.

The case is not much different in São Tomé und Príncipe. From the outside, the island nation is an untouched paradise. Ranked 10th by Lonely Planet last year as best places to visit. But, the island nation close to the equator off the coast of Central Africa, hides a deep rooted alcohol problem and pervasive alcohol norm.

The scientist Isabel de Santiago carried out a survey to get to the bottom of the alcohol problem in the island nation between September 2013 and May 2014 with 2064 participants in São Tomé and Príncipe. Her results revealed,

Instead of acknowledging and taking action about the problem the country has turned against the scientist.

The government has accused de Santiago of “damaging the country’s reputation” with her study, tried to prevent publication, threatened to file a criminal complaint against the scientist and urged her to appeal to all residents, in particular to publicly apologize to the children of the island nation.

Everyone from the bishop, to hotel owners to mothers are in denial about the country’s deepening alcohol problem.

Everyone seems to be in denial about the heavy toll alcohol is taking because fueled by alcohol myths and ignorance the alcohol norm in São Tomé und Príncipe runs deep. Alcohol use is an everyday occurrence for most people. They use alcohol thinking it will cure illness, or reduce hunger, but most of all as an escape from poverty.

The islanders believe alcohol mixed with herbs can cure stomach problems. It’s even given to children as young as 6 years to “kill worms”. Many mothers who give their children “healing liquor” also do not know that it could harm their health. On the contrary, the brew is considered medicine.

They also believe they can escape problems using alcohol. According to de Santiago, high proof alcohol is omnipresent all throughout the life.

Hard liquor can be found in almost every corner of the country. Palm wine is recommended for hot days. Cacharamba, a high proof alcohol, is also widely available. Alcohol is sold around children, in markets next to fruits and fresh fish.

The country is so much in denial de Santiago has even received death threats. The scientist says she isn’t afraid because people’s lives are at stake. She plans to conduct another study in the island.

People are dying. Children and adolescents will have long-term health problems. How can you just look away?” asked Isabel de Santiago, as per Der Spiegel. 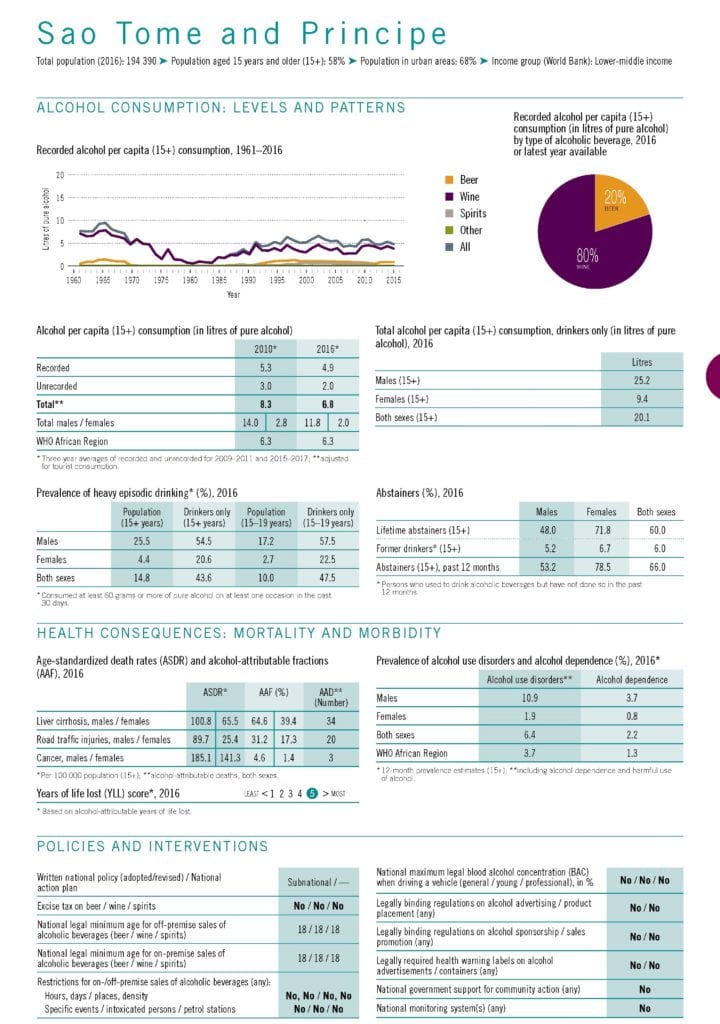 In addition, also patterns of alcohol use are troubling, according to the WHO:

The country ranks as the highest level for years of life lost due to alcohol.

Despite the obvious alcohol harm, the country does not have a national alcohol policy or excise taxes on alcohol or any restrictions of retail sales and marketing.

It’s imperative that the government acknowledges the country’s alcohol problem and implements a comprehensive alcohol control policy including the best buy measures recommended by the WHO. Awareness campaigns are also necessary to debunk the alcohol myths in the country. Urgent action is needed to safeguard the people of São Tomé und Príncipe, specifically youth and children, from the serious alcohol harm.