Posted on July 3, 2020 in
Alcohol's Harm To Others, Obstacle To Development, Policy, Prevention, Sustainable Development

Burkina Faso: 300,000 Liters of Liquor Destroyed in Ouagadougou As part of the government’s efforts to curb informal alcohol, the Ministry of Trade, Industry and Handicrafts, through the Mobile Economic… Read more »

As part of the government’s efforts to curb informal alcohol, the Ministry of Trade, Industry and Handicrafts, through the Mobile Economic Control and Fraud Prevention Brigade (BMCRF), proceeded to destroy sachets of adulterated alcoholic beverages and beverages unfit for consumption at the landfill center in Tanghin, Ouagadougou.

BMCRF coordinator Yacouba Bila said the destruction operation was the equivalent of 300,000 liters of liquor, as per Burkina 24 reporting.

Mr Bila added that similar operations were taking place in other regions of the country, too.

Burkina Faso, is a landlocked country in West Africa. It covers an area of around 274,200 square kilometres and is surrounded by six countries: Mali to the north and west; Niger to the east; Benin to the southeast; Togo to the southeast; Ghana to the south; and Ivory Coast to the southwest. The July 2019 population estimate by the United Nations was 20,321,378, according to Wikipedia.

In 2016, the average life expectancy of the Burkinabé was estimated at 60 for males and 61 for females. In 2018, the under-five mortality rate and the infant mortality rate was 76 per 1000 live births. In 2014, the median age of its inhabitants was 17 and the estimated population growth rate was 3.05%.

In terms of alcohol harm, Burkina Faso ranks among the countries with the highest numbers of years of life lost due to alcohol. While 63% of the adult population abstains from alcohol consumption in any given year, those Burkinabé who consume alcohol engage in heavy alcohol use and often also in heavy episodic alcohol use. 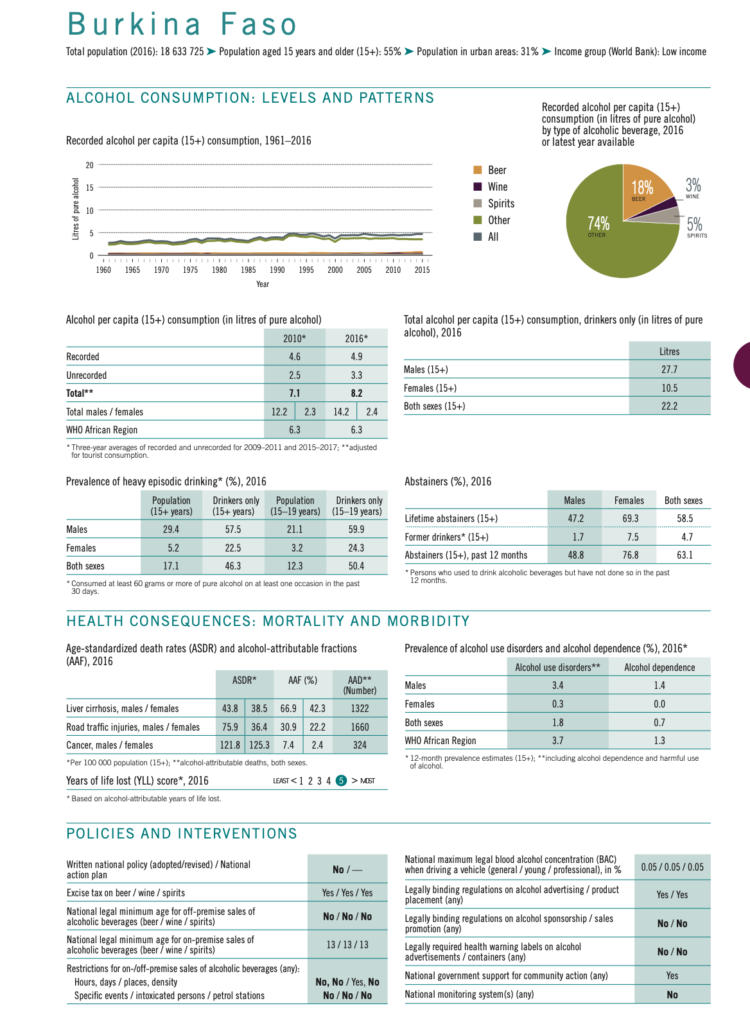 WHO data from 2018, publish in the World Health Organization Global Alcohol Status Report, shows that annual per capita consumption of recorded alcohol was 4.9 liters and 3.3 liters of unrecorded alcohol.

Burkina Faso’s alcohol policy system is underdeveloped. The country does not have a written national alcohol policy and not even a legal minimum age limit for off-premise alcohol purchases. And in bars and restaurants, Burkinabé as young as 13 are legally permitted to purchase alcohol. Burkina Faso also does not regulate alcohol availability regarding outlet density and opening hours. The country’s alcohol marketing regulations are also flawed, according to WHO standards. And Burkina Faso does not have a national monitoring system for alcohol consumption and harm.

Per capita alcohol intake of alcohol users in Burkina Faso is worryingly high with more than 22 liters of pure alcohol per year. More than 50% of the young people who consume alcohol engage in heavy episodic alcohol use. And even for adults that number is 46%. These WHO data show the confluence of high-risk volume and patterns of alcohol consumption.

Alcohol harm is pervasive in the country. More than 3% of Burkinabé men have an alcohol use disorder. Every year, more than 1300 people from liver cirrhosis caused by alcohol. And more than 1600 people die of alcohol-related road traffic injuries.