Almost done! Our new website is now under final development, and we are still working out some bugs and finalizing the content. If you have any issues, send an e-mail to Maik!
Exposing a track record of undermining science and hindering evidence-based policy measures, putting profits over Human Rights

Simply put: alcohol harm is an industrial epidemic – an epidemic caused by a commercial product and the industry profiting from it.

While many people are aware of the high death rates that tobacco and unhealthy food cause, fewer are familiar with the staggering burden of alcohol,” writes Prof. Nicholas Freudenberg in his 2014 book Lethal But Legal.

The 4 Ds of the industrial epidemic

The products and unethical business practices of Big Alcohol contribute to ill-health, to injuries and violence, to mental ill-health and suicides, and to quality of life lost, as well as premature death. The alcohol industry is manufacturing death, disease, destruction and disability.

or example Non-communicable diseases such as cancer, cardiovascular disease, or diabetes; or infectious diseases like HIV/ Aids or tuberculosis.

What is Big Alcohol?

The alcohol industry consists of producers, distributors, retailers and marketers of alcohol products – and are connected by the thirst for ever more profits from alcohol. They are joined by PR agencies, law firms and SAPROs (social aspects public relations organizations).

Together they have accumulated so much financial and political power that Big Alcohol is able to delay, derail, and undermine public policies that protect Human Rights and that promote sustainable development, social justice and public health.

The 10 largest alcoholic beverages companies worldwide are ranked according to total annual sales (domestically and internationally), as of December 2018. Company sales may include products other than alcoholic beverages – which is also illustrated in the map.

This map illustrates the alcohol market concentration by showing how many brands this small number of the biggest alcohol giants control.

Below are the world’s 15 largest alcohol corporations ranked by total annual sales (both domestic and international) reported as of December 2019, per World’s Top Expert.

It is largely these multinational alcohol giants and their brands that fuel the alcohol burden across the world.

The alcohol market in most countries is now dominated by a handful of gigantic multinational corporations. This market concentration has severe consequences for public health and safety and is fuelling the industrial epidemic.

Market concentration has resulted in economies of scale and profit growth, providing these alcohol giants with unprecedented resources for buying into markets, for promoting alcohol brands, for interfering in public policy making and for purchasing the science that helps protects their profits.

With non-profit classifications, deliberately confusing do-gooder names such as the International Center for Alcohol Policies and the Foundation for Advancing Alcohol Responsibility, and frequent name changes, it can be challenging to distinguish organizations with true public health motives from those with vested interests.  Through their SAPROs and industry think-tanks, the Producers position themselves ingeniously and can confuse media outlets, policy makers, alcohol scientists and the public, which often assume the information is coming from an independent reliable source.

The Global Producers seem to be taking control of the public relations battle with the public health community by securing stronger control of front organizations that can be more directly involved in their “Commitments” agenda.

ICAP’s metamorphosis seems to be a strategic maneuver to extend the Global Producers’ already sizeable power.

Who is the IARD?

It’s a lobbying front group for 12 of the largest multinational alcohol corporations – a merger of ICAP and GAPG. It’s a lobbyism giant for the alcohol industry, covering all three industry branches – wine, beer and liquor – and representing the majority of global regional alcohol brands. Many of these corporations are interconnected on their own part (shown by the violet color code). So, what’s the political agenda of IARD? Public health or the profit interests of these brands and corporations?

ICAP is registered as a non-profit, but it is funded by 15 of the world’s leading alcohol producers, most of which are the same companies that comprise the GAPG.  It was founded in 1995 by a consortium of alcohol companies, including MillerCoors, which at that time was part of tobacco giant Phillip Morris.

ICAP has revealed is true colors as an instrument of the transnational alcohol producers.  If at one time the ICAP slogan of “Analysis, Balance, and Partnership” seemed persuasive to some, can anyone doubt the hollowness of these words now?

GAPG represents the world’s 13 leading beer, wine and spirit producers including Beam, Bacardi, Pernod Ricard, AB InBev, and Diageo.
Since its inception, the organization has spent more than $1 million on lobbying the US government alone, taking positions that seem to be diametrically opposed to those recommended by the public health community

In 2012, SpiritsEUROPE was formed by the merger of Confederation of European Spirits Producers (CEPS) and the European Forum for Responsible Drinking (EFRD). EFRD may be better recognized by its previous name—The Amsterdam Group (TAG).  Its members include many of the same producers who make up the GAPG, including Beam, Diageo, Brown-Foreman and Pernod-Ricard.

The Distilled Spirits Council is the national trade association representing the leading producers and marketers of distilled spirits in the United States. DISCUS says about itself:

The National Tax Service (NTS) found that the whiskey maker inflated costs for advertisements and other transactions so it could report lower profits and thereby avoid taxes, the sources said.

The members of the FAAR are some of the same alcohol producers that form IARD, such as Bacardi USA, Pernod Ricard USA, Diageo, Hood River, Edrington, Constellation Brands, Brown Forman and Beam Suntory.

The alcohol industry works to interfere in evidence-based alcohol policy making that seeks protect health and well-being because these policy solutions threaten the profits of Big Alcohol.

Independent scientific evidence clearly shows: The alcohol harm dwarfs the economic contribution of the entire alcohol trade. However, the alcohol industry works to perpetuate myths about their product and its effects, spread doubt about scientific evidence and pressure decision-makers to refrain from regulating Big Alcohol.

The alcohol industry is a big buddy of Big Tobacco. Both industries are tightly connected on the highest levels. Big Alcohol has over the years learned from the mistakes and success of the tobacco industry and takes pages out of the playbook of Big Tobacco. The alcohol industry has thus accumulated a worldwide track record of opposing and undermining evidence-based, high-impact policy measures that would promote health, well being and social progress.

Independent scientific evidence clearly shows: The harm of alcohol use outweighs by far the benefits from “moderate use”. However, the alcohol industry works to perpetuate myths about their products and its effects, spread doubt about scientific evidence and pressure decision-makers to refrain from regulating Big Alcohol.

The alcohol industry is a big buddy of Big Tobacco. Both industries are tightly connected on the highest levels. Big Alcohol has over the years learned from the mistakes and success of the tobacco industry and takes pages out of the playbook of Big Tobacco. The alcohol industry has thus accumulated a worldwide track record of opposing and undermining evidence-based, high-impact policy measures that would promote health, well being and social progress. 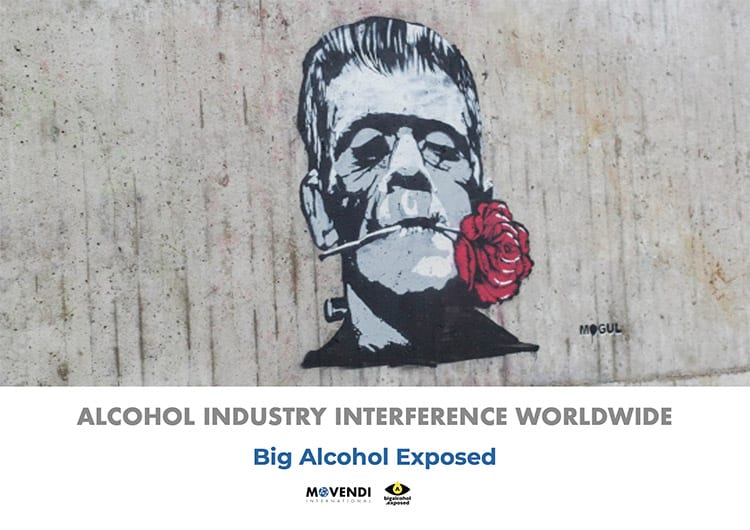