Reflections and opinions from a research symposium in Africa: the tactics of Big Alcohol in research, policy making, climate footprint of alcohol production, more evidence on alcohol harm…

Attending the 39th Annual Alcohol Epidemiology Symposium of the Kettil Bruun Society (or #KBS2013, as it is known on Twitter) at Munyonyo Resort in Uganda has been an enlightening experience.

Firstly, as this is the first research symposium I have ever attended, I was quite astonished that only 10 minutes are given for a presentation. I found this to be too little time to internalize research that had been conducted and to deduce conclusions from them in order to find questions to ask the researcher. However, after consulting with other researchers, I was informed that this was the norm.

Secondly I found some discussants to be quite harsh on some researches. It seemed to me they had no background information and as far as I was concerned, a discussant should be someone who at least knows something about the country that the research presented dealt with. I’m not sure what the discussant selection criteria was but I guess there weren’t enough from Africa.Thirdly, I thought for a research topic such as alcohol, which from my experience, too few governments, organisations and people in Africa have sufficient knowledge, the $400 registration fee was quite exorbitant and too much to ask Africans to pay. I would suggest that next time such a symposium is hosted in Africa, attendance should be subsidised. Of course there was “sponsorship” for presenters but it was not enough to draw the crowd that I expected. The venue is absolutely beautiful as it is situated on Lake Victoria and has perfectly manicured gardens.

During the past couple of days, there has been a vast array of research presentations related to the two themes Big Alcohol’s marketing tactics and Alcohol Policy and the influence of the industry through aggressive lobbying. The MAMPA research (Monitoring Alcohol Marketing in Africa – MAMPA Project) portrayed how the “Scramble for Africa” by the industry was causing tremendous harm and concerns. 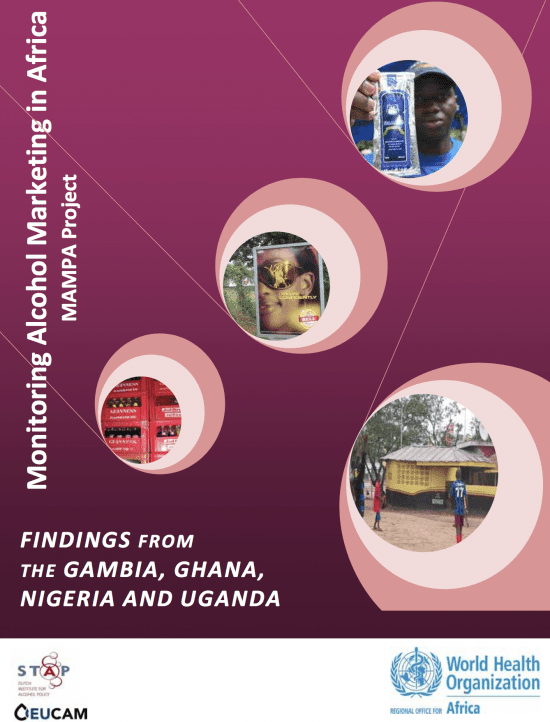 Although Big Alcohol tried to shoot the conclusions down by claiming (as usual) the methods were subjective, the data was too few and policy recommendations were inappropriate, MAMPA proved that Big Alcohol is not playing by the rules in Africa. The Delphi study illustrated this, too, because it proved that there were 35-74% marketing violations, for example airing commercials between 9 and 10pm when youth are awake.

In Africa, the youth are being targeted because they make up most of the population and of course once they are using alcohol, profits are guaranteed for a long while.

The meddling of Big Alcohol in Policy making was made quite clear as well. It seems they want to be involved in policy making by hook or by crook, to the point of approaching Ministries who don’t know much about them or by sponsoring water projects so that they can use that as leverage in the future (despite the fact that alcohol production wastes huge amounts of precious water, see below)

Sheila Ndyanabangi described BigAlcohol aptly when she said during this conference that “we should not make deals with the devil”.

What was truly amazing (read shocking) to me was that alcohol is a problem the world over. It’s quite ‘comforting’ to know that it is not only our problem but it affects Africa more adversely because we are not rich nations, our governments aren’t yet invested in making the lives of its citizens better. This is what makes the alcohol use problem even more catastrophic than in other areas of the world.

All the researches pointed out one problem after another related to alcohol but Big Alcohol is making loads of money from this vice and is not willing to let up the profits as evidenced by the millions of dollars it sets aside for marketing.  An alarming factor was that, alcohol and tobacco were being treated differently by almost everyone including WHO because they are viewed differently. For example, when tackling the tobacco problem, tobacco industries were not invited, however in similar meetings related to alcohol, ICAP (Big Alcohol front group International Center for Alcohol Policy) has been present. But the conflict of interest of Big Alcohol is quite evident as seen by the amounts of dollars spent on marketing. One particular research found this conclusion:

“A sophisticated campaign by global alcohol corporations to promote themselves as good corporate citizens and to frame arguments with a focus on users of alcohol rather than the supply of alcohol has resulted in their acceptance in the global governance arena dealing with policy development and implementation in a way that is unthinkable for tobacco.”

This is quite terrifying because this inclusion only means they will do anything to protect their interests i.e. moneymaking and the policies to protect the people will be watered down.

One thing that stood out though was the gaping hole between research on alcohol concerning my beloved continent and the rest of the world. In my opinion, we are still grappling with trying to make our countries, especially our governments, realize that alcohol is a problem impacting many different areas of society, that it is related to other problems that befall us. Therefore our research is very much geared into proving how alcohol use causes health problems such as NCDs and HIV. I think we need more research on how Gender based violence is related to alcohol, poverty is increased due to alcohol, child mortality is an adverse effect of alcohol, and so on. Associating alcohol only with health problems limits our work and potential.

To support governments decide on what measures to take regarding alcohol advertising, it is essential to provide insight into the impact of advertising, specifically in terms of volume, frequency, and content of alcohol advertising and promotion. The study on alcohol marketing was commissioned by the WHO Regional Office for Africa in 2010 and its findings generated data on alcohol advertising and promotion in Uganda, Nigeria, Ghana and Gambia. The content of advertisements and marketing styles appeal to young people. The results underline the need for countries to strengthen policy and legislation to restrict alcohol marketing.

The brewing process consumes around five litres water for every liter of beer produced. But that’s only a drop in the bucket when compared to the total of anywhere from 61 to 180 liters required, depending on which country the ingredients are produced in.
Tanzania used the most water, requiring a total of 180 liters for each liter of beer, with South Africa second at 155 liters. Peru and Ukraine were tied for the least at 61 liters each, though that large discrepancy may be accounted for, at least in part by the fact that these two countries both use a significant amount of gray water for cultivation purposes.
In each case at least 89% of the total water usage goes to the cultivation of ingredients of such as hops and barley.