As South Africa enters level 3 lockdown from June 1st, the two month long alcohol sales ban is lifted, with restrictions. But alcohol harm, fueled by heavy consumption and an array of aggressive alcohol industry practices, remains a major burden on South African communities and society. The need to invest in solutions to prevent and reduce harm has never come into sharper focus than during the on-going public health crisis. Four solutions for the alcohol policy of the future show the way to go…

The need to invest in solutions to prevent and reduce harm has never come into sharper focus than during the on-going public health crisis. Therefore, Joan van Dyk of Bhekisisa shares four solutions for how to reduce alcohol harm in future as the alcohol sales ban is relaxed.

South Africa implemented an alcohol sales ban early on from the beginning of April during COVID-19 lockdown. The ban has been linked to major benefits for the country. These include a significant reduction in violent crime, violence – especially domestic violence, reduced violent trauma cases and deaths in hospitals, as well as low road traffic injury and death. Overall, South Africa saw a reduction in unnatural death during the lockdown comparative to before COVID-19, while many other countries saw unnatural death rates soar.

While the ban was beneficial, it will not be continued.

The government has announced from the June 1st all licensed alcohol outlets (on-premise and off-premise) will be allowed to sell alcohol for takeaway purchase only between 9AM and 5PM. On-premise consumption will be strictly prohibited and alcohol is supposed to be sold only for at home consumption.

Alcohol places a heavy burden on South Africa. It causes about an average 171 deaths per day according to research publiched in BMC Medicine. 2009 projections from the South African Medical Journal show alcohol-related harms could cost the economy R263 billion annually. 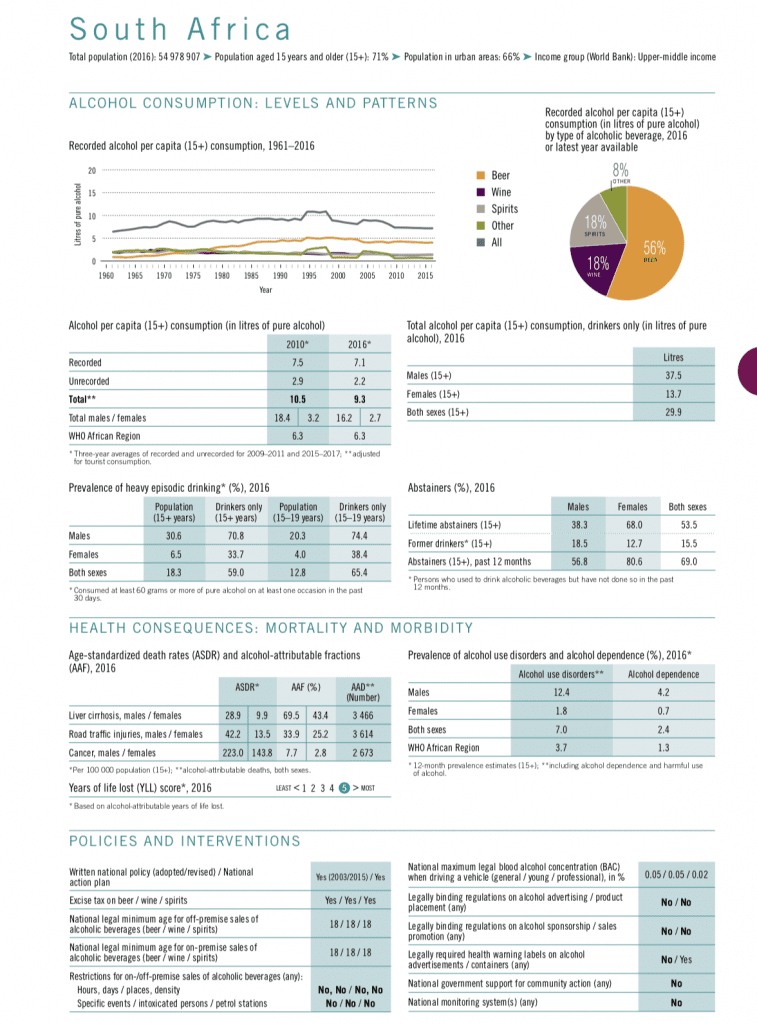 According to the World Health Organization, a South African who consumes alcohol consumes 29.9 litres of pure alcohol per year. The people who consume alcohol do so in very heavy amounts. At the same time, over half (53.5%) the country’s adults do not consume any alcohol at all.

Among alcohol users, binge alcohol consumption is very high. Almost two-thirds (65.4%) of youth between 15 to 19 years who consume alcohol engage in heavy episodic consumption. Over half (59%) of all alcohol users above 15 years binge on alcohol.

The heavy consumption leads to South Africa being ranked among the highest in years of life lost due to alcohol, according to the World Health Organization (WHO).

4 Solutions for the government to prevent, reduce alcohol harm in future

People and communities in South Africa are suffering from a heavy alcohol burden. This has existed before the novel coronavirus pandemic. The pandemic led to the government to take succinct action to reduce the avoidable alcohol burden within the country, through the alcohol sales ban. The ban has proven that the government can take action in the interest of the public when needed and wanted. The police and the provincial liquor authorities have enforced laws and South Africans have said alcohol harm needs to be tackled with evidence-based policy solutions.

Following are four ways for the government to better prevent and reduce alcohol harm in the country in the coming months and years.

A 2018 research published in the journal ‘Substance Abuse Treatment, Prevention, and Policy’ found that in South Africa, people who consume alcohol from an above average size container are about eight times more likely be heavy alcohol users than those who consume from regular sized containers.

Charles Parry, the head of the South African Medical Research Council’s (MRC) unit on alcohol, tobacco and other drugs says one way to curb heavy alcohol use is to stop selling beer from large containers such as one litre bottles.

Movendi International reported recently that using over-sized bottles, beer giant AB InBev is pumping up the volume in Africa in pursuit of ever more profits. A beer war is unfolding on the back of people and communities with major rival Heineken. Therefore, limiting alcohol container size is an important solution to reduce alcohol units on the market.

2. Protect the well-being of South Africans

The South African government needs to analyze the benefits of the alcohol sales ban on the average South African person. This knowledge of how the ban may have improved lives specifically in communities hard hit by alcohol harm, governments can prioritize the well-being of people through improving alcohol policy.

Research suggests there is wide support for better alcohol policy solutions among South African adults. Half of the 1920 alcohol consumers surveyed in Tshwane supported increased restrictions on alcohol, including raising the legal age limit for alcohol purchasing to 21 years, limiting the number of alcohol outlets in a given area and restricting operating hours for bars and shebeens.

South Africa’s existing Liquor Act prohibits misleading promotion, but marketing of alcohol remains unregulated in the country. The alcohol advertising regulations proposed by the 2013 Control of Marketing of Alcohol Beverages Bill proposes a more comprehensive restriction which bans all alcohol marketing except at point of sale. The bill was approved by the cabinet but never implemented or made public.

According to South Africa’s most recent Demographic and Health Survey and 2018 data from the World Health Organisation, half of South Africans who consume alcohol consume in high-risk levels.

It is important that people with alcohol use disorders and other alcohol problems can access easy and affordable support services.