Increasing the prices that consumers pay for alcohol is one of the most effective tools available to policy-makers looking to reduce alcohol consumption and related harms, according to a new report. However, not all pricing policies are equal in their effectiveness or impact on alcohol harm and socioeconomic inequalities fueled by alcohol, says WHO Europe in the new report “Alcohol pricing in the WHO European Region”.
The new “update report on evidence and recommended policy actions” demonstrates that alcohol pricing policies offer a uniquely powerful opportunity to reduce the burden of alcohol harm across Europe. But the report also clearly shows that these pricing policies are not currently being used to their fullest effect…

Increasing the prices that consumers pay for alcohol is one of the most effective tools available to policy-makers looking to reduce alcohol consumption and related harms, according to a new report. However, not all pricing policies are equal in their effectiveness or impact on alcohol harm and socioeconomic inequalities fueled by alcohol, says WHO Europe in the new report “Alcohol pricing in the WHO European Region”. 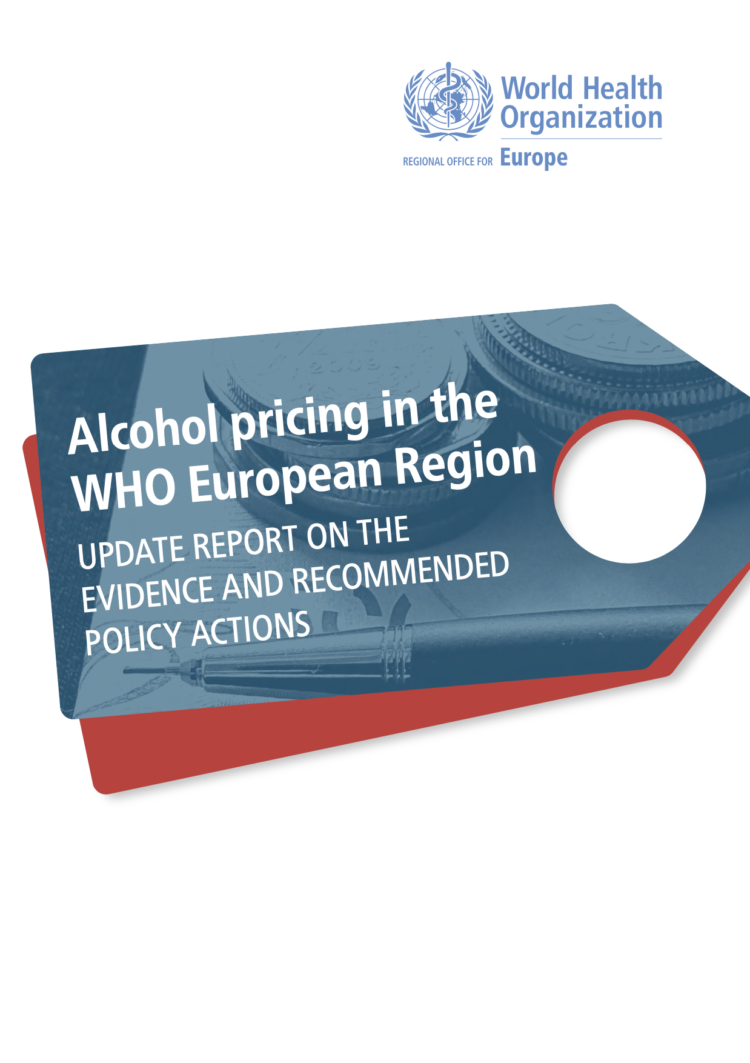 The new “update report on evidence and recommended policy actions” demonstrates that alcohol pricing policies offer a uniquely powerful opportunity to reduce the burden of alcohol harm across Europe. But the report also clearly shows that these pricing policies are not currently being used to their fullest effect.

Therefore, a more effective approach to pricing policies, which reflects the existing evidence, is required to prevent and reduce alcohol harm across the WHO European Region.

The report analyzes the evidence for the effectiveness of alcohol pricing policies in multiple dimensions, such as

Numerous reviews of the scientific evidence have concluded that pricing policies are a highly effective measure to reduce alcohol-related harm. Policy measures that increase the cost of alcohol are effective and cost-effective at reducing alcohol consumption and related harms. Not all pricing policies are equally effective. For instance, minimum unit pricing (MUP) and levying alcohol duty on the basis of a product’s alcohol content are likely to be more effective than other approaches. These approaches are also the most likely to reduce health inequalities.

Importantly, the report emphasizes that alcohol tax structures that apply very unequal levels of duty to different alcoholic products are less likely to be effective at reducing consumption and harm than those alcohol tax regimes that have similar rates across all products.

Failure to link pricing policies to inflation is likely to lead to an erosion in their effectiveness over time as the real-terms value of the duty rates or MUP threshold falls.

The most comprehensive approach to controlling alcohol pricing is a state-run alcohol sales monopoly, according to the WHO Europe report. Several recent studies have found that retaining monopoly systems, where they exist, is likely to be substantially less harmful to public health than a policy of privatization.

There is a substantial body of studies which have evaluated the impact of increases in alcohol taxation on alcohol consumption and related harm. The overwhelming conclusion from these studies is that taxation policies are a highly effective strategy for preventing and reducing alcohol harm.

As well as reducing alcohol consumption and harm, there is also limited evidence that increases in alcohol taxation may delay the age at which adolescents and young adults first start consuming alcohol.

The evidence is strongest that specific alcohol taxation (or volumetric taxation, where alcohol duty is levied on the basis of the alcohol content of a product) is relatively most effective of the different approaches at reducing alcohol consumption. Nevertheless, many EU member states are prevented from implementing a fully specific system of alcohol taxation by European Union directives. These require wine and other products, including cider, to be taxed on a unitary basis (European Commission, 1992), meaning that EU countries are unable to implement tax systems that are optimal from the perspective of public health. 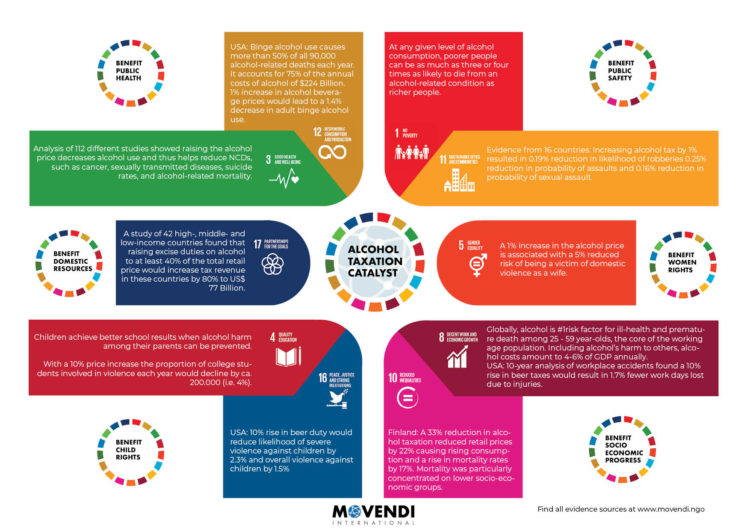 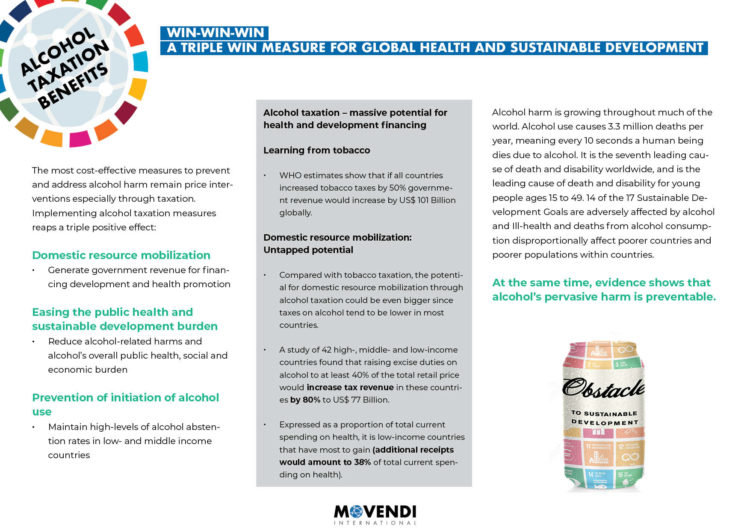 Evidence for MUP is robust

Minimum unit pricing (MUP) is an alcohol policy approach to introduce a floor price below which a fixed volume of alcohol, e.g. a “unit”, cannot be sold to the public. Unlike increasing alcohol taxation, which affects the price of all alcoholic products, MUP only increases the price of the cheapest alcohol.

The evidence to support the effectiveness of MUP is robust, according to the WHO Europe report.

Another alcohol pricing policy the report examines is the restriction on the sale of alcohol at below the cost the retailer paid for it. This policy prevents shops from selling very cheap alcohol as a “loss leader” to entice customers into the store. Legislation banning this practice is in place in several European countries, including France, Spain, Italy and Greece. However, there is little evidence to support the effectiveness of this policy as a public health strategy, according to the WHO Europe report.

A related policy not plagued by the same limitations is the policy to ban the sale of alcoholic products for less than the cost of the tax payable on the product. This policy was implemented by the United Kingdom government in 2014; however, analysis at the time found that less than 1% of all alcohol sold would be affected by the ban and therefore its public health impact in terms of reduction in population alcohol consumption would be negligible (0.04%).

A final approach to alcohol pricing policy is the restriction of discounting by alcohol retailers. Restricting the availability of cheap alcohol is likely to be a positive policy, but evidence for its effectiveness is limited.

Evidence for the impact of alcohol pricing policies on health inequalities

The alcohol burden is particularly concentrated in heavier alcohol users from lower socioeconomic groups. The potential for pricing policies to address the significant inequalities in health that are caused by alcohol is therefore substantial.

The report emphasizes that pricing policies have been highlighted as “the most promising policy intervention to reduce social inequalities in alcohol-related harm”. But a key question remains as to which specific pricing policies are the most effective at reducing health inequalities.

The report examines a number of challenges to effective alcohol pricing policies. The alcohol industry and their political interference are the foremost challenge, but also their misrepresentation of the evidence is a significant challenge, for example regarding unrecorded alcohol.

Unrecorded alcohol is an umbrella term for alcohol that is not accounted for in official statistics on taxation and sales in the country where it is consumed because it is usually produced and sold outside the formal channels under government control. Examples are:

Overall, unrecorded alcohol is often the cheapest form of alcohol available in a country and is thus an important consideration for alcohol policy-makers, especially in regions such as eastern Europe and central Asia, where unrecorded consumption is estimated to be particularly high, accounting for around 15–30% of all alcohol consumed.

At the same time, the report emphasizes, it is vital to keep unrecorded alcohol in perspective and to understand that the alcohol industry consistently overstates these concerns in order to lobby against effective policy actions on price. The evidence suggests that there is never full substitution between recorded and unrecorded consumption.

The issue of unrecorded alcohol supports the argument for a holistic approach to alcohol policy that encompasses enforcement, customs policies and coordinated action in neighbouring countries. Such an approach may be informed by the one taken in relation to illicit tobacco set out in Article 15 of the WHO Framework Convention on Tobacco Control.

The alcohol industry has a fundamental conflict of interest when it comes to alcohol policy in general and alcohol pricing policy in particular.

The alcohol industry is dependent on heavy alcohol user for the bulk of their revenue.

That is why the alcohol industry perceives a significant threat from policies that seek to increase the price of alcohol in order to reduce alcohol consumption and prevent harm.

It is therefore unsurprising that many commercial actors and industry-funded corporate social responsibility organizations strongly oppose effective alcohol policies such as action on pricing.

The report concludes with a set of key alcohol pricing policy recommendations.

The protection of health should be a key consideration in this process, particularly when one also considers the burden which alcohol-related ill health places on health-care services and the economy more broadly. The evidence to support the effectiveness of pricing policies as a measure to reduce alcohol-related harm is extremely robust, and they should be considered a key tool for any policy-maker who wishes to reduce this burden,” according to the WHO Europe report.

Citation of the report

WHO Europe, 2020: “Alcohol pricing in the WHO European Region. Update Report on the evidence and recommended policy action” (PDF)

For further reading from the blog