Posted on July 2, 2020 in
Alcohol's Harm To Others, Policy, Prevention

The government of Oman has brought back the 100% tax on alcohol, as of July 1. Alcohol taxation is the single most effective alcohol policy solution and recommended by the WHO…

The government of Oman has brought back the 100% tax on alcohol, as of July 1.

The Ministry of Finance announced the new policy change after having revised the alcohol excise tax in June 2019, when the tax was cut in half, for a period of six months.

The Ministry of Finance explained that the reduction in tax was based on observations received by the General Secretariat of taxation which were studied and underwent a review recently.

Movendi International reported in March 2019 that a royal decree had been issued to tax 100% for alcohol and tobacco and several other health-harmful foods and drinks in Oman. Sultan Qaboos bin Said took the decision following similar moves by Saudi Arabia, the United Arab Emirates, Bahrain and Qatar.

Oman is a country with a large majority of adults who live free from alcohol, according to the World Health Organization 2018 Global Alcohol Status Report. The result is positive for public health and safety, with low mortality and morbidity due to alcohol. Oman is rated as a country among the lowest number of years of life lost due to alcohol, with only few people suffering from alcohol use disorders or dependence. 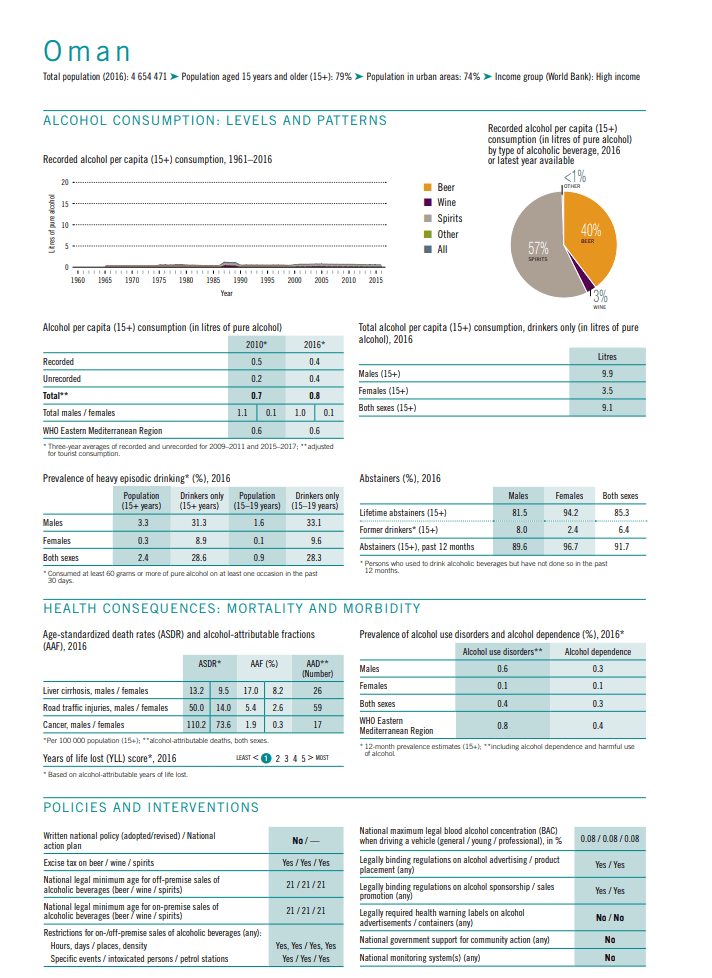 Nevertheless, the country does not have a written national alcohol policy. The incorporation of such a policy could reduce alcohol harm even more and lower the current per capita consumption of alcohol which is still slightly higher than the average of the WHO Eastern Mediterranean region.

Alcohol taxation is the single most effective alcohol policy solution and recommended by the WHO.

Alcohol taxation and pricing policies are among the most effective and cost-effective alcohol control measures. An increase in excise taxes on alcoholic beverages is a proven measure to reduce [alcohol harm] and it provides governments revenue to offset the economic costs of harmful use of alcohol,” according to WHO’s SAFER initiative.