by Maik Dünnbier Posted on March 24, 2015 in
Policy, Prevention

TB is about Human lives and the sustainability of Human society. As successful treatment of the multi-drug resistent TB cases is becoming increasingly impossible, the urgency and dire need for both preventive strategies as well as an efficient vaccine are paramount. Alcohol policy measures have added value in the global response to the tuberculosis epidemic…

Do you remember what you did last year, on March 24?

March 24 hasn’t been a significant day for me in my life. My dad’s birthday is on March 20 but the 24th has usually not received much of my attention. Nevertheless, I do in fact remember vividly where I was today, one year ago.

It was World Tuberculosis Day then. And it is – as the social media know it – #WorldTBDay today. One year ago, I went to meetings in Baltimore, MD at the Johns Hopkins School of Public Health and then traveled back to Washington D.C. to attend an event I had been invited to, by the US government. It was a conference about the global TB crisis. And the stories I heard, the movies I watched and conversations I had with people who overcame the disease and relatives who lost loved ones to TB, will stick with me. I certainly feel them today.

Every year 9 million human beings get infected with tuberculosis (TB). And three million people don’t get the care they need.

It’s about investments and funding, medication, treatment and cure, about early detection. And it is about prevention.

TB is an infectious disease, transmitted from person to person via droplets from the throat and lungs of people with the active respiratory disease, and caused by Mycobacterium tuberculosis, which most commonly affects the lungs. Infectious diseases account for 43% of the global health burden, according to the Global Burden of Disease study by the WHO. In 2004, TB was responsible for 2.5% of global mortality and 2.2% of global burden of disease with more severe impact in low- and middle-income countries.

Despite the progress made on controlling the global TB epidemic, due to Millennium Development Goal 6 (WHO reports that through effective diagnosis and treatment 37 million lives have been saved between 2000 and 2013), the disease poses still a major global health threat. And make no mistake, it’s not “just about Africa”. Especially in the WHO European Region, achieving MDG 6 is a distant dream. A thousand people are contracting TB, daily, in Eastern Europe and Central Asia.

These few numbers tell the story that the current TB disease burden is enormous. TB ranks among the 10 most fatal and disabling diseases worldwide. The world would be a better place if high-impact measures to prevent it and to enhance interventions and treatment were in place. 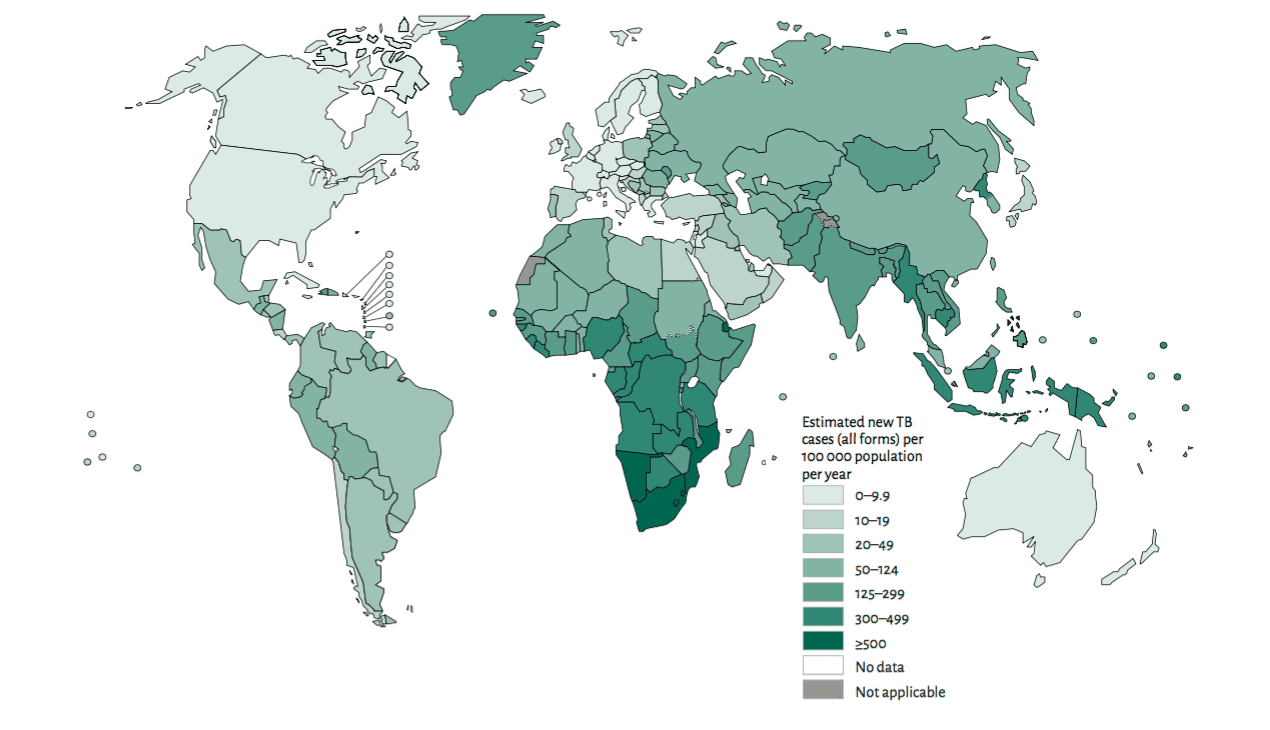 Urgency for innovative strategies to tackle the epidemic

There are two major obstacles hindering the global community to effectively and sustainably improve the situation:

It is estimated that over the coming three decades, multidrug-resistant TB likely will kill 75 million people. Multidrug-resistent TB could cause costs to the global economy of up to $16.7 trillion (€15.3 trillion).

TB, is about humans beings, human lives and the sustainability of human society. As successful treatment of the multi-drug resistent TB cases is becoming increasingly impossible, the urgency and dire need for both preventive strategies as well as an efficient vaccine are paramount.

AiAP – Alcohol policy measures should be part of the prevention approach

Those high-impact prevention measures should come out of the alcohol policy toolbox. The reason is simple and rooted in evidence: Alcohol use is a risk factor for TB. About 10% of the TB cases globally are attributable to alcohol. The AiAP – Alcohol in All Policies – approach means to assess the added value that evidence-based, high-impact alcohol policy measures can have on other public health, social, developmental and economic issues. Tuberculosis is one of these issues, where cost-effective alcohol policy measures really can unfold preventive effects.

Numerous studies illustrate the pathogenic impact of alcohol on the immune system, which causes the susceptibility to TB among heavy alcohol users. In addition, there are potential social pathways linking alcohol use disorder and TB. Heavy alcohol use strongly influences both the incidence and the outcome of the disease and was found to be linked to altered pharmacokinetics of medicines used in treatment of TB, social marginalization and drift, higher rate of re-infection, higher rate of treatment defaults and development of drug-resistant forms of TB. 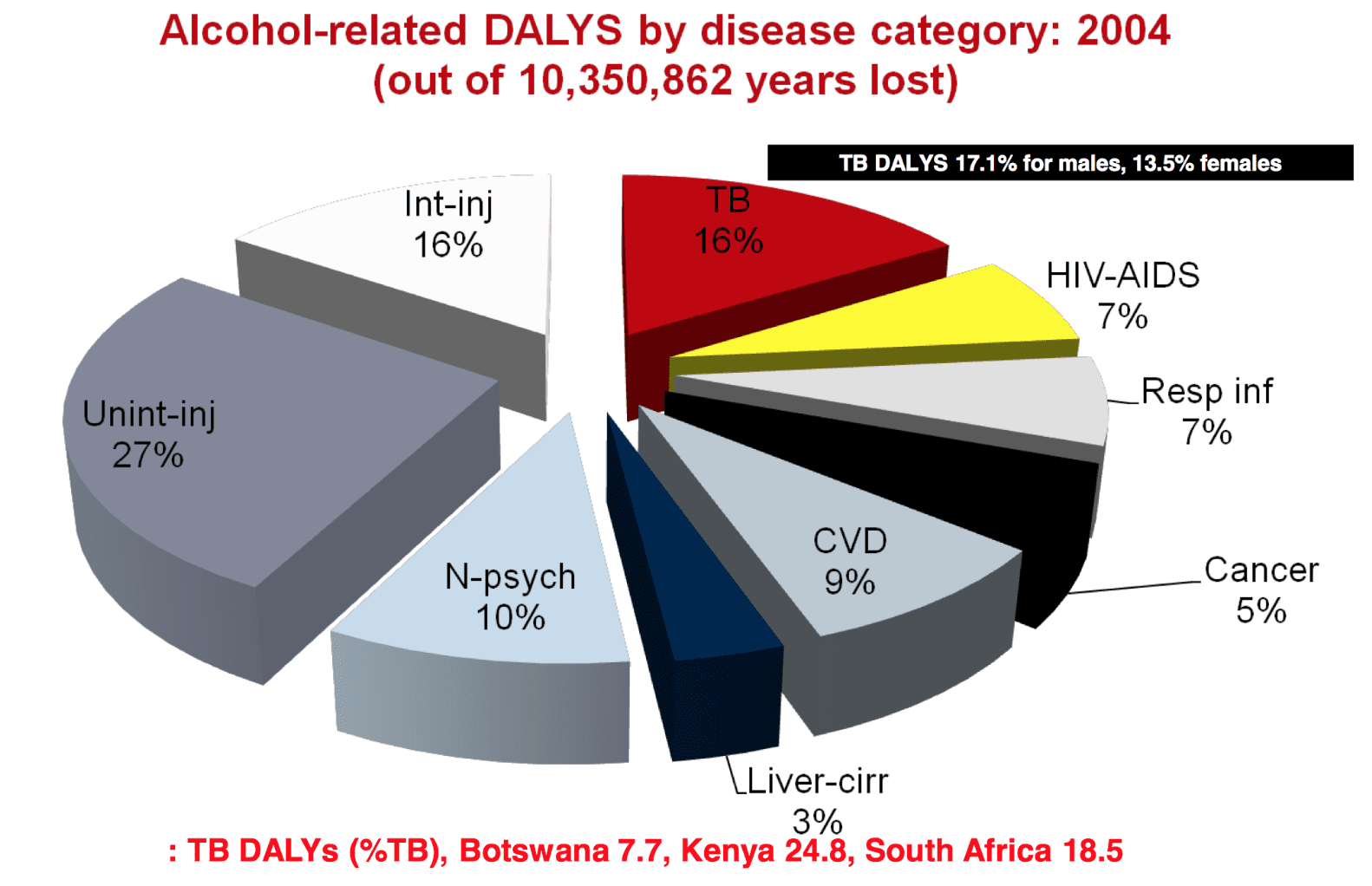  Evidence shows that alcohol use is causally linked to tuberculosis and is as such one of the biggest health hazards on earth, being a risk factor for HIV/ Aids, violence against women, and non-communicable diseases.

Alcohol exposure at the population level should be reduced by high-impact, evidence-based policy measures, such as measures decreasing the availability, decreasing the affordability and banning alcohol advertising and sponsoring, this is likely to help prevent and control TB in affected communities.

I think that global leaders, including the Global Fund, UN Aids, Pepfar and the WHO should be able to do a better job of using alcohol policy measures as part of their comprehensive approach to reducing the global TB burden. I was disappointed to realise that alcohol harm and alcohol policy have not been mentioned once in the 2015 publication “A guide to monitoring and evaluation for collaborative TB/HIV activities“. The world deserves better and we can do better – together.