One year alcohol ban in Bihar, India: “We fed the dragon for decades and when it comes to confronting with it now and the harm it has caused, why are we in such a hurry to conclude negative results?” Unpacking the arguments against the Bihar alcohol ban, and taking stock of the success story… 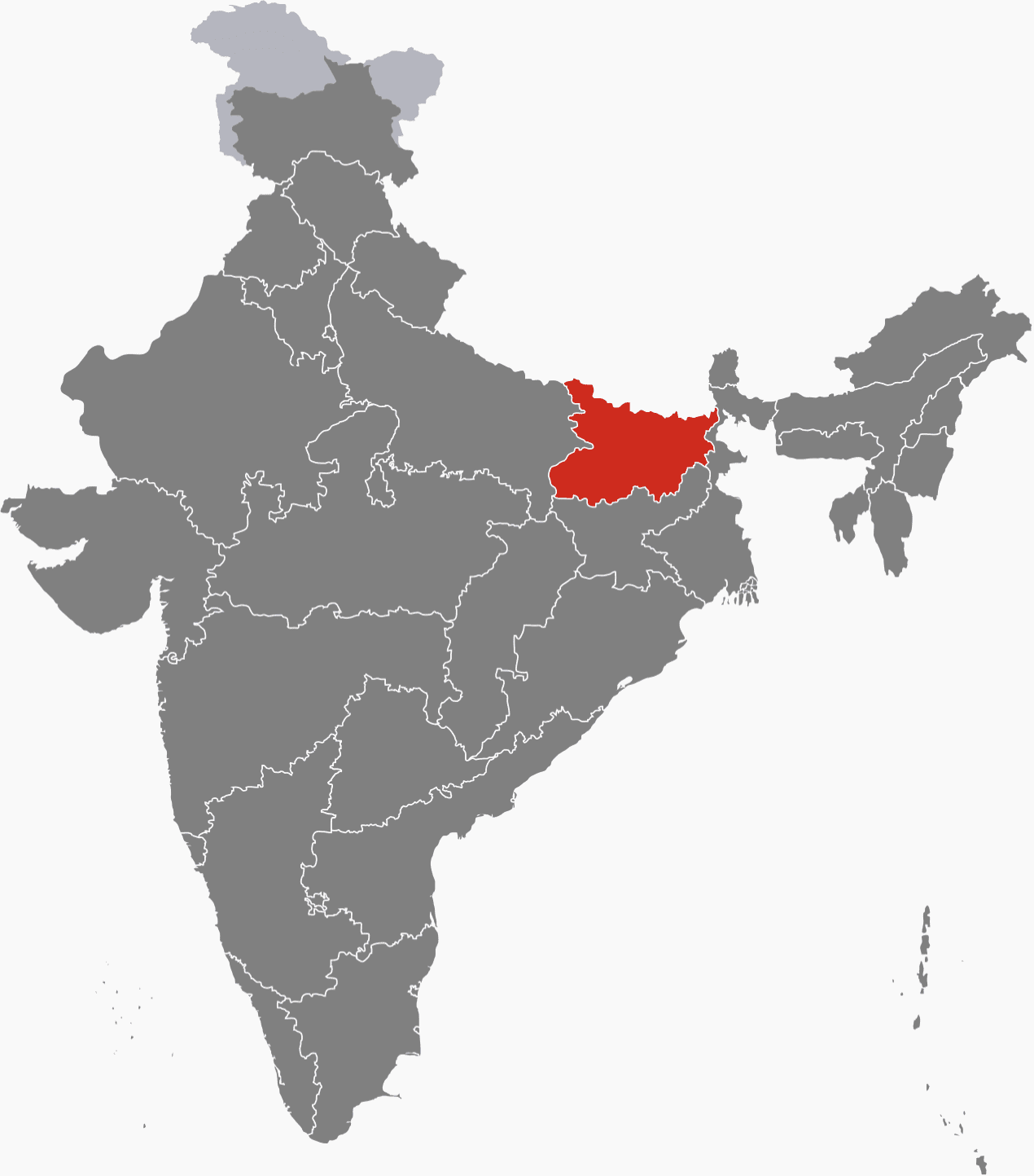 Ironically nobody bothered much about a lesser known state in India that had been notorious only for its Jungle raj, illiteracy rate, and low GDP compared to the rest of the states in India. But it ensnared in media attention as Mr Nitish Kumar mooted the idea of alcohol prohibition during his election campaign, after scores of women members of Self-Help Groups demanded its inclusion in the state vision document towards 2025. Mr Kumar has been Chief Minister of Bihar, the 13th-largest state of India and located in Eastern India, since February 2015. Since taking office, he has kept his promise by taking a bold and clear stand to follow through on the alcohol ban with the Bihar Excise Act 2016.

What is the alcohol ban about?

The Bihar Excise (Amendment) Act, 2016 is an Act of the Bihar Legislative Assembly, the lower house of the state parliament, which prohibits the manufacturing, bottling, distribution, transportation, accumulation, possession, purchase, sale or consumption of any type of liquor, intoxicating substance including bhang and medicines with alcoholic substance. The Act prescribes stringent punishment including capital punishment to those manufacturing or trading illicit liquor.

It also has a provision under which people who allow their premises to be used for a congregation where liquor is served and brawls take place will be imprisoned for a period of ten years which can be extended to life term.

Though per capita income is less than $600 a year in Bihar – one of India’s poorest, most agrarian states – many if not most men used it to routinely spend much of their money on alcohol, further impoverishing their families. In Bihar, like in many other societies around the world, alcohol is a massive obstacle to development, fueling household and community deprivation and poverty, as well as violence against women and girls, and ill-health and premature death.

The act took effect in April 2016. Mr. Kumar had planned to enact the law in stages, beginning in rural areas. But protesters prevented liquor stores from opening in the state capital, Patna, even though they were still legal under the first stage of the ban.

Before its adoption, the act was bitterly opposed by many including the Patna High Court calling it a draconian and unconstitutional measure, violating the fundamental rights of citizens. But even after its passage, the act receives criticism still.

There were and are critical reports in a few media outlets, such as this article in The Times of India, arguing that alcohol-fueled domestic violence has not declined at all after the alcohol ban was introduced. Some media outlets even report that crime rose by 13% after prohibition with the intent on indicating alcohol has nothing to do with crime and went to the extent of arguing that Article 47 of our constitution amounts now no more than to being a parental advice to a prodigal child.

Central Government Act
Article 47 in The Constitution Of India 1949

But despite the picture that some media outlets are trying to create, the public — particularly women — were and are energized about the alcohol ban. Between 200 and 300 complaints a day came in to police hotlines and email accounts, said Alok Raj according to the New York Times, who, as the additional director general of police, took the lead in enforcing the law.

The arguments are based on selective data, originating mainly from Patna, the capital and largest city of the state of Bihar. Therefore, they cannot account for the entire state and they do not serve as a tool to conclude that crime has nothing to do with alcohol consumption. The apparent rise in cognizable crime from 14.279 cases in April 2016 (the month from which prohibition has been enforced) to 17.507 cases in June 2016 may be due to several factors. Data submitted must be studied with a comprehensive outlook and relative analysis.

The total cognizable offences registered in 2015 are 195.397 compared to 189.681 cases in 2016 after prohibition. When we compare the rate of crime year wise, the crime rate is noticeably low after prohibition which is a very positive sign and indicates that in future there might be a further reduction in crime rates as per the Bihar Police reports quoted by Chief Minister Mr. Nitish Kumar. 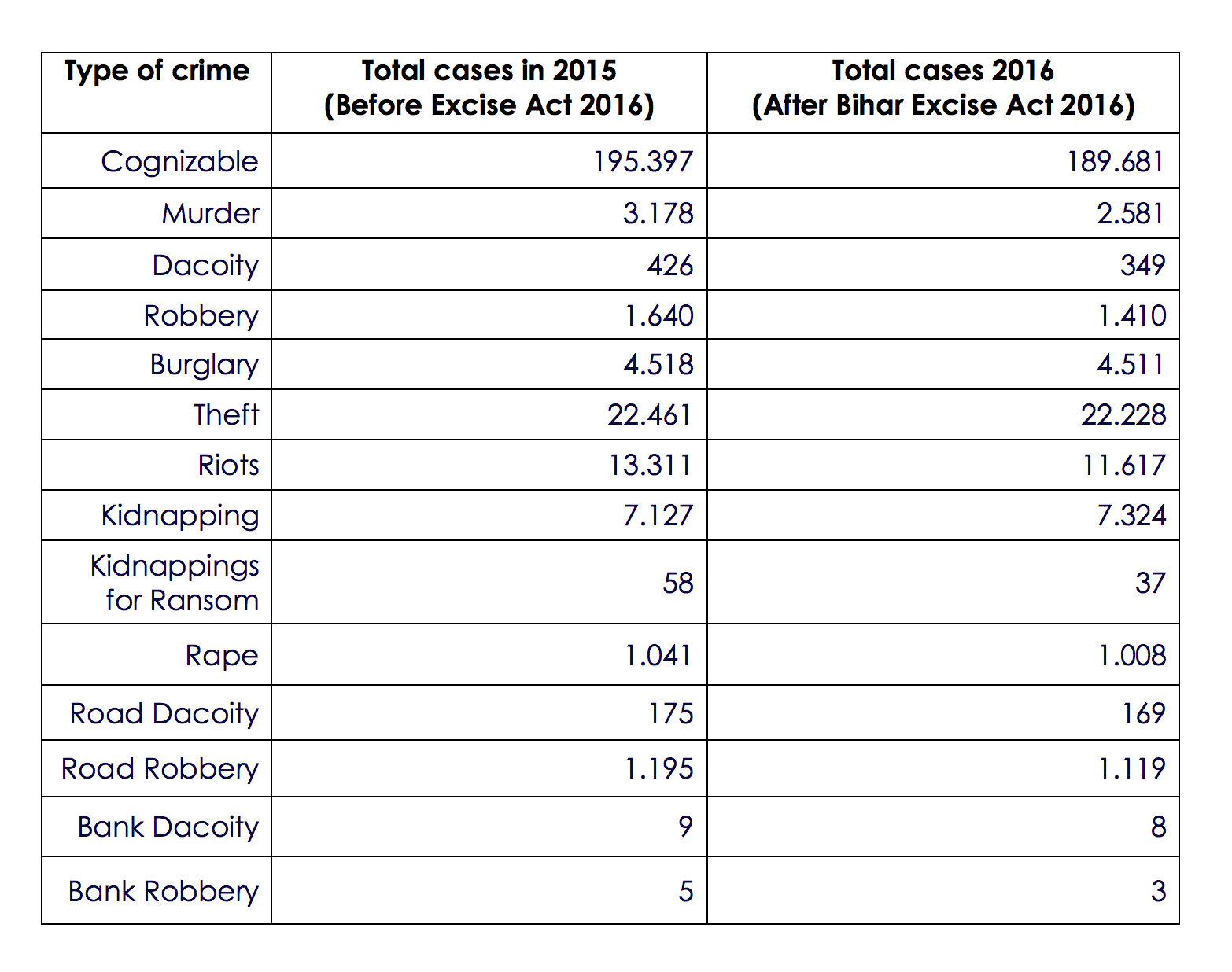 The data from Bihar police accounts for crime all across Bihar state, not just parts of it. The data shows that there is a decline in rates of crime since the implementation of the Bihar Excise Act in 2016. It shows that some media outlets engage in criticism against the act that is not founded on evidence.

Evidence of a success story

Other evidence shows the positive effects of the alcohol ban, too. Consider these five points, for instance.

These facts show that some of the arguments leveled against the alcohol ban are not true. The economy has not tanked. The New York Times reports that the “alcohol ban succeeds”.

… the law imposing severe penalties for the sale and consumption of alcohol seems to have worked remarkably well. The crime rate has fallen sharply, government figures show, and spending on things like motorbikes and appliances has risen significantly. And almost everyone credits the vigilance of the women of Bihar for most of the law’s success.”

Not everything has turned around

Alcohol prohibition, I must warn, is not a silver bullet.

We fed the dragon for decades and when it comes to confronting with it now and the harm it has caused, we must ask: Why are some media outlets in such a hurry to conclude negative results? Why are some Indian media doing a worse job in reporting accurately about the policy than foreign media, like the New York Times? Profit interests, fueled by India’s own powerful alcohol industry do play a role.

Therefore, I urge, let us introspect our motives. Let us listen to the millions of women who suffered from alcohol fueled violence. Let us hear their stories and let us ask: Is their situation improving? Is the Bihar economy faring better and is our public health developing?

Criminal attitudes are not changed overnight which were grown certainly in the vicinity of alcohol. Alcohol is no ordinary commodity but should be treated as a toxic substance that causes addiction and cancer and many other harms.

The people who made a living turning rice and fruit juice into alcoholic drinks — often the poorest, lowest-caste residents — have been pushed into lower-paying jobs as day laborers. We need to help them find better paying and more rewarding jobs that continue to boost development in Bihar.

Night life in Patna has been subdued, as many restaurants that used to serve alcohol have closed, their revenue down by as much as 50. We need to find ways to make our cities and nightlife attractive, free from alcohol. There are certainly solutions for that.

Prohibition alone is not enough as it may even lead to an unholy nexus between a liquor mafia and law enforcement agencies. Dealing with alcohol and the prevention of alcohol harm needs dedicated deliberation and a balanced approach, rooted in Human Rights public health and sustainable development, with a stent focus on those that fare better and those that are in danger of being left behind.

2 comments on “Is Bihar Faring Better Or Worse After Alcohol Ban?”