Akpeteshie – A Vicious Cycle Of Death

by David Ekwueme Posted on April 2, 2013 in
Alcohol's Harm To Others, Obstacle To Development, Sustainable Development

Alcohol abuse causes nearly 4 percent of deaths worldwide, more than AIDS, tuberculosis or violence, the World Health Organization warned, but alcohol related abuse and consequence causes more than 15% death. The lack of effective alcohol policy and its implementation in Sub-Saharan Africa have brought Ghana to a looming  stage of distress and contributed towards cripling the control of alcohol use in Ghana. In Ghana, the common traditional alcohol is called “Akpeteshie” which is described as deadly. 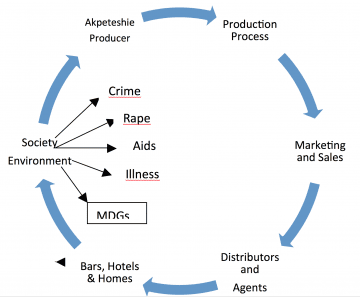 Akpeteshie is a homebrewed alcoholic spirit produced in Ghana and other West African nations by distilling palm wine or sugar cane juice. Other names for this drink include apio, ogogoro (in Nigeria), sorabi, keley, “hot” or “hot drink” and “kutukù” (in Nzema).

Akpeteshie is not professionally bottled or sealed, but instead poured into unlabelled, already used bottles. The spirit can be bought wholesale from a brewer or by the glass at boutiques and bars. Although not professionally advertised, the stuff is very popular. This is partially due to its price, which is lower than that of other bottled or imported alcohol. It’s relative inexpensiveness makes it a drink associated more with the poor, but even those who can afford better quality are said to consume the spirit also. The potency of the liquor heavily affects the bodily senses, providing a feeling likened to that of a knockout punch. The spirit is between 40 to 50% alcohol by volume.

Akpeteshie is brewed all over Ghana and you need no authority or license to own one and hence you decide how, where and when you will sell and at which strength.

Poor Ghanaians produce this brew for the money obviously and what happens to the society due to the harmful effects of the brew is not there immediate concern and hence the short term effect (profit interest) tends to ignore the long term effects (death, diseases, crime, rape, violence, and other social crimes)

A Ghanaian woman that brew a local akpeteshie,  has been published in the widely read  Guardian newspaper based in London.

How can a local brewer with such unhygienic production environment, content, health  and  social consequences  be a celebrity and honoured for selling a local brewed alcohol with more than 50% alcohol content (poison) which has lasting consequences to the society and the entire population while an average farmer in Ghana is NOT even noticed?

This is a question I ask to the publishers. Moral values, society and other factors play a huge role in how we advertise and expose alcohol production and usage. I wonder if I sell sex in the streets of Ghana and use the money to take care of my family, maybe The Guardian will publish my contribution to my family as a positive step towards self-sufficiency…

The Guardian article: “The Brewer Who Supports Her Family” that portrays the production of a home-brew without any comment and hindsight to the social consequences of the brewing illicit alcohol.

Global Burden of Disease Study 2012, by WHO and The Lancet

4 comments on “Akpeteshie – A Vicious Cycle Of Death”