Alcoholism and alcohol dependencies need more attention and concern especially since alcohol use kills more people than illicit drugs and because alcohol is the socially most harmful drug.

I was presenting a paper  at the First International Congress On Drugs and Dependencies in Lisbon last week on  Tackling Drugs As A Global Issue. After my presentation, I came to realise that I needed to have changed the word  drug dependencies to read  alcohol dependencies. 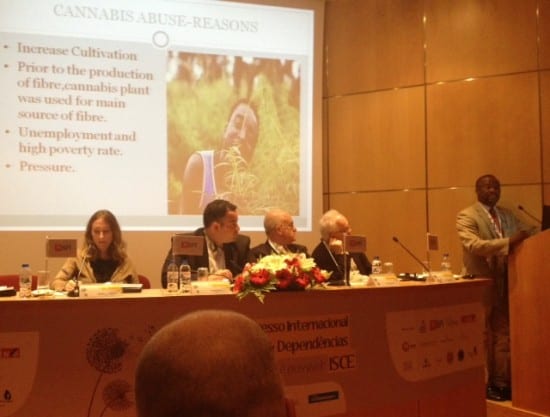 My presentation at the Lisbon Conference

There is a need to reform the drug dependencies and treatment policies globally which became clear to me during the Lisbon conference. The United States Of America delegates, as well as the European delegates were making a case for the damage illicit drug dependencies cause our society globally today, yet the results of the deaths and other damages caused by alcohol far outweigh that of illicit drugs and it seems to me that we have a situation where the socially accepted substance (but nevertheless a toxic, addictive drug) alcohol has been ignored and is given less attention, despite knowing full well the consequences of it.

I try to argue that there is a need to give alcohol policies and reform a wider room and to deal with the menace alcohol causes. I think it’s obvious that alcohol is a silent killer in our society.

During this 5-day international conference, I was able to see that alcohol is a drug and its addictive effects is a mental health issue; its use causes many problems not only to mental health but also physical and social health and the economy at large. Alcohol abuse and  use is one of the unfortunate habits acquired through ignorance of its harmful effects. Efforts are being made to curb its use against deliberate efforts by Big Alcohol and its countless immoral marketing practices and their agents to increase alcohol use.

What really matters to me is the need to empower Ghanaians and all other Sub-Saharan Africans about the effects of alcohol, the role of Big Alcohol and for them to strengthening and implementing alcohol policies in Ghana and all of Sub-Saharan Africa.

Alcohol use seems to be linked with sociocultural life of Ghanaians. Its abuse in Africa is largely due to ignorance and increased, aggressive efforts by Big Alcohol to market alcohol.

The use alcohol and other drugs in Ghana is not only widespread but continues to be one of the top issues the health sectors have to deal with. It’s the duty of citizens, policy-makers, the governments and civil society organizations to help alleviate this problem.

Alcohol has been named the world’s third greatest risk factor in the development of premature disease. It’s not an innocent substance and its effects spill often over into society. Alcohol’s intoxicating, toxic and dependence-producing properties, as well as the social constructions and myths connected to its use, play a role in violence, child neglect and abuse, shattered relationships and poor job performance.

The use of alcohol is a global problem that claims at least 2.5 million lives per year. The sad reality is that many of the lives lost are caused by an intoxicated person’s poor choices that ultimately resulted in the harm of others.

the WHO Global Alcohol Strategy, 2010