The news is not that the alcohol industry does this. The outrage is not that they admit it. The story is that Big Alcohol tactics to target women have real and adverse consequences…

Women in the 21st century are potentially the biggest, most powerful drivers for sustainable human development and global prosperity. But as a group they are also – still – subjected to tremendous inequalities, health threats and poverty. There is no question that women and girls are benefiting from tremendous progress in the last decades. Women outnumber men in colleges and universities in countries around the western world. Millennial women are better educated than their male peers. Life expectancy of women is also longer.

Despite all this progress, much work still needs to be done to achieve gender equality and a reality where women and girls have access to the same opportunities and are as empowered as men and boys.

However, the advances in Women’s Rights are being jeopardized. The progress in gender equality is being threatened. Women and girls are under attack.

This is for real. It is not a conspiracy theory. And it is not an exaggeration either. A quick rundown of some newspaper headlines helps to set the stage.

Are women increasingly at risk of addiction?”

Alcohol Linked to Growing Number of Deaths, Accidents Among Women”

For women, heavy drinking has been normalized. That’s dangerous.”

A sober woman’s journey through the booze-fueled holiday season”

Young Australian women are most dependent on alcohol”

Alcoholic liver disease on the increase in young women”

Twelve headlines – spanning from November 2013 to February 2017 – tell a clear story: the alcohol industry is attacking women and it’s not pretty. I have not even mentioned the aggressive push into countries with currently high abstention rates among women, like India or in Sub-Saharan Africa. And I have not mentioned either a topic that remains largely ignored by the media: alcohol-fueled violence against women. These headlines from Western countries alone tell a clear story:

The alcohol industry is aggressively targeting (young) women to recruit them as new consumers of their products.

After decades of portraying women as objects, after an avalanche of alcohol marketing that has been sexualizing and de-humanizing women, Big Alcohol has not discovered the emancipated woman that could help boost their profits.

As results and profits in the alcohol industry have been rocky, major liquor and beer producers have started exploring how to “hunt down new revenue streams”, as Business Insider Australia reported in late 2014. Consider the example of the beer industry:

These two facts underline the huge opportunity that remains unlocked for beer producers and the alcohol industry at large. That is where their aggressive campaign to target women and recruit new female consumers comes from.

In the last years, we are seeing a massive and unprecedented push across the alcohol industry to target women and girls – evident in product design and marketing messages.

For instance in 2011, Molson Coors stuck to stereotypical marketing tactics for the 2011 launch of its Animée beer brand in the UK market.

The 4% ABV beer, named after the French word for “motivated”, was lightly sparkling and came in three variants: clear filtered, crisp rose and zesty lemon. The product launch was driven with a $US3.2m marketing push to establish the beer as a “real choice” for women and was promoted as being “bloat resistant.” The marketing campaign featured glamorous women pointing their heels as they sat atop Animée bottles and also included a sampling partnership with hair salon brand Toni & Guy. 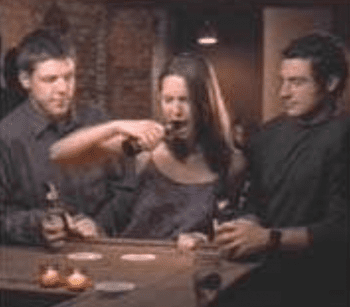 Another example is Amstel beer that ran an advertising campaign in 2003 in the United States to launch the Amstel Light brand. The ads depicted women copying male behavior when having a beer. For instance, one woman opened beer bottles with her teeth. The Amstel beer brand belong to Heineken, the world’s second largest beer producer.

A third example is SAB Miller’s product Redd’s. It is an apple- infused malt beverage, with a citrus flavor, for the female demographic. It was first introduced and tested in Poland in 1997 and later was launched in Russia where it has seen especially strong growth. In 2007 it was launched in Latin America. For example in South Africa, 80% of the sales are to women.  Consider also the product packaging that is meant to appeal to women, according to a EUCAM report: SABMiller is selling Redd’s in packages of 5 or 10 bottles, rather than the heavier 6-, 12- or 24-packs that are typically hauled out of stores by men. The bottles hold less beer than standard-size bottles. And the 5- and 10-packs are shaped like a woman’s handbag.

Products especially designed to appeal to women, both in taste and design; marketing campaigns targeting women; and packaging, and messaging – the alcohol industry means serious business with regard to converting women into customers.

Beer brewer SABMiller’s CEO Alan Clarke has criticised the “insulting” tone of beer advertisements over the years for driving away female customers,” write industry insider The Drinks Business in early 2014.

We have to acknowledge that core lager, for many years, was either dismissive of, or insulting to, women.”

Clark went on to call on the alcohol industry to “modernise” its image, in order to bring women into the fold. Beer advertising over the years had ignored women or presented them as “a butt of a joke”.

This quote is revealing for its truth, with the cynical twist that the new-found “respect” for women is a double-edged sword. A few years later, Clark’s SABMiller merged with AB InBev – a company that is responsible for this kind of marketing message:

That is sexism epitomized in one label. But the internet is awash in sexist alcohol commercials.

Sexism and objectification then, disease, addiction and stigma now

The alcohol industry has a vast track record of advertising campaigns that sexualize, de-humanize and objectify women. Big Alcohol representatives admit that themselves:

The industry has basically alienated women with its marketing,” Mark Luce, senior vice president of marketing for Latin America at SAB Miller told the International Herald Tribune in 2007.

Alcohol marketing has been playing (and still does) a sinister role in establishing and perpetuating harmful norms about male and female power relations and the role of women in society. For several decades, alcohol marketing has legitimized and amplified the common stereotype of male superiority over females. Alcohol marketing is a major culprit in fueling norms that facilitate gender-based violence, by justifying and even glamorizing male power and dominance over the other gender.

Alcohol-fueled violence against women, especially in intimate relations and in the home, is still rampant around the world:

The news is not that the alcohol industry does this. The outrage is not that they admit it. The story is that Big Alcohol tactics to target women have real and adverse consequences.

Data from countries around high-income countries shows that while alcohol use and related harm have historically been more prevalent in men than women, this gender gap has now closed.

A 2016 analysis of 68 international studies found that the male-to-female ratios of alcohol use and associated harm have shrunk dramatically across birth cohorts from 1891 to 2001.

Alcohol use disorder among young girls in the United States

More hospital admissions, addiction treatment and deaths in the UK

As more women are part of the workforce than ever before, more women find their way to the top of industries, corporations and bureaucracies. Economic empowerment has also lead to increases in alcohol use and alcohol-related harm. Data from the UK shows that female managerial and professional workers are more likely than female routine and manual workers to have consumed alcohol in the last week, and to have consumed alcohol on five days or more in the last week.

Data also shows that a higher proportion (60%) of women in employment used alcohol in the week prior to the survey than women who were unemployed (39%) or economically inactive (44%).

Across the world it has become clear that Big Alcohol preys on the economic empowerment of women. The consequences are severe for women:

Two sides of the same medal

Liver disease epidemic. Mental ill-health and addiction. Accidents, injuries and deaths. Marginalization of the alcohol-free lifestyle choices. Stigma about female alcohol use and intoxication in the media.

The campaign to recruit women and girls to take up and consume more alcohol has worked – for Big Alcohol. We can for example see it in the liver disease epidemic – young women, with university degrees and on the cusp of an emancipated, free and empowered life end up in hospitals for treatment of diseased livers.

It is difficult to be healthy and to raise healthy children in a toxic cultural environment, an environment that surrounds us with unhealthy images and that constantly sacrifices our health and our sense of well-being for the sake of profit,” says Jean Kilbourne.

The advances for women around the world are in jeopardy due to the onslaught of Big Alcohol pushing alcohol into the lives of women and girls. What we observe in countries like the United States and the United Kingdom is also looming in low- and middle-income countries.

Women’s rights will be under attack by Big Alcohol and corporate leaders who don’t care about feminism, if we do not stop them. Women empowerment will continue to be sacrificed by the alcohol industry in pursuit of ever more customers. But where can change come from?

I think that the solution lies within the Women’s Rights community and the feminist movement. They have been powerful and impactful in the last century and they (we) need to wake up to this reality that alcohol harm is a serious feminist issue. These newspaper headlines are not fake news!