Exposing Why AB InBev Spends More Than Ever On Sports Marketing

Anheuser-Busch InBev is the world’s largest beer producer, controlling every third bottle of beer sold in the world. AB InBev keeps making headlines with gigantic investments in alcohol promotions during major sports events, like the Fifa World Cup, the Super Bowl and other tournaments with global viewerships. This aggressive investment in brand promotion must be understood in direct connection to the beer giant’s performance on the stock markets and its ability to make shareholders happy.

From mega-merger to mega challenges

The world’s largest beer producer, AB InBev, is and has been in a slump in recent years. The historic mega-merger in October 2016 when Anheuser-Busch InBev (AB InBev) took over SABMiller for more than $123 billion (!) was overwhelmingly supported by SABMiller shareholders, as it opened new growth opportunities, especially in sub-saharan Africa.

But since then, the new beerhemoth had to contend with the repercussions and consequences of the gigantic deal:

Anheuser-Busch InBev would surely prefer not to give up a slice of its biggest growth business if it could afford to keep it all. Yet the Belgian brewer is considering selling a stake in its Asian operation via a public share offering.

The indebted group’s recent moves to strengthen its finances perhaps didn’t go far enough to support an ambitious growth strategy over the next few years.”

AB InBev has struggled to grow out of the debt burden it took on with the $123 billion purchase of SABMiller in 2016. In June 30, 2018 net debt was a staggering $109 billion, per Bloomberg. In addition the beer giant is troubled by weak sales results.

As a result, in October 2018, the beerhemoth announced it would cut the dividend in half to give itself some breathing room. Consequentially, AB InBev shares plunged 10%. Two years after the megadeal shareholders were much less happy.

Reports of weak demand in key countries like Brazil and the United States are increasing pressure on the AB InBev leadership. They have sold less beer in North America each year since 2014, with a steep decline of 6.2% in the third quarter of 2018, as Reuters reports. Market share for AB InBev’s core brands Budweiser and Bud Light has kept declining. In 2018, the beer giant’s U.S. revenues fell 1.4%, since its flagship Budweiser and Bud Light brands continue to lose market share.

AB InBev reported lower-than-expected earnings and revenues in third-quarter 2018. In fact, the beerhemoth reported earnings miss in eight out of the 10 preceding quarters. Earnings were mainly hurt by higher income tax. Shareholders are very unhappy about these trends, creating heavy pressure on the CEO and leadership to turn the situation around.

Since the U.S. is the most important market, with Bud Light the largest brand at 19% market share, AB InBev has replaced its U.S. leadership to stem the decline. Analysts expect that the incoming CEO would aggresively prioritize pulling in consumers rather than pushing distribution.

In September 2018, AB InBev’s sales unit also had to reorganize, including cutting roughly 2% of its workforce, about 300 jobs. And the beer giant streamlined its global management structure in the summer of 2018, shifting to six global zones from nine, to cut costs as shares fell as much as 4.9% in early Brussels trading, the most since November 2016. 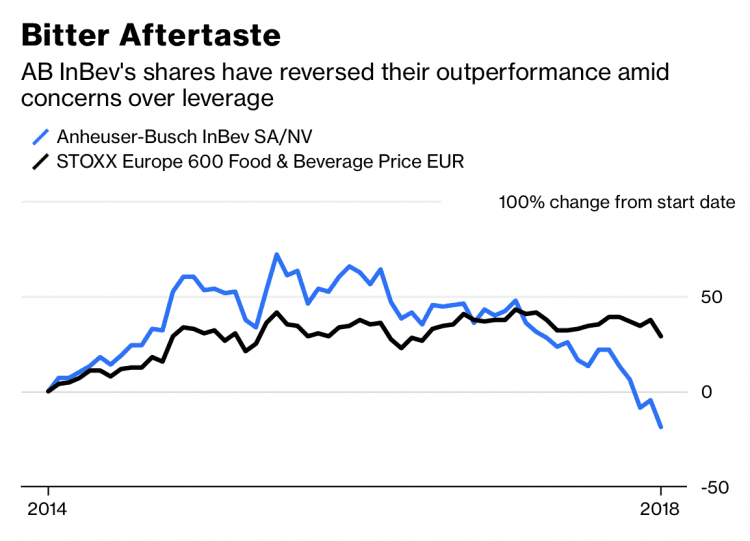 Investors and shareholders have been questioning the beer giant’s strategy after its third-quarter results missed expectations and dividends had to be halved. Asia Pacific contributed $2.3 billion of AB InBev’s revenue in the quarter that ended September 30, accounting for 17% of global sales, according to Bloomberg analysis.

Therefore, pressure is mounting to for AB InBev to sell a stake in its biggest growth business, its Asian operations, to gain some financial uplift and strategic benefits. The transnational beer giant is now discussing whether to turn its Asian operations into a publicly traded company to refinance some of its $100 billion debt load, according to a Bloomberg report. The sale comes in tandem with a tender offer for up to $11 billion of notes in 12 series. This deal will help AB InBev pay down debt and unlock value while giving the beer giant the financial flexibility to pursue new deals, such as acquiring French beverage giant Castel Group, which would require as much as $30 billion, reports The Street.

In its relentless pursuit of growth, acquisition deals and aggressive marketing spending are key tools.

When we covered the mega-merger (one of the biggest corporate mergers in human history) in 2016, we foresaw these developments. The staggering costs of the deal would cause more aggressive activities to pay off debt, relentless cost-cutting measures, efforts to increase profitability, exertion of market dominance, heavy investing in marketing to entice consumption, and aggressive political activity to stave off regulation that would reduce alcohol consumption – all to ensure profits are growing and there would be returns on the investment into the SABMiller take over.

AB InBev’s ability to keep spending big time on marketing and acquisition deals is crucial at this moment in time. Big Alcohol corporations are purchasing stakes in the emerging Big Marijuana. It’s the kinship of addiction industries. Additionally, in the fight for global dominance in traditional and emerging markets, alcohol marketing spending is key.

The Beerhemoth is planning to generate more growth from sports events and social occasions after the past decade’s influx of smaller brands weaned alcohol users off its mass-market brews, Bloomberg reports. To tackle the challenge, AB InBev is investing $2 billion in brand promotion and marketing in the U.S. alone.

This is where spending on the Super Bowl comes in. It’s connected to a new push to increase consumers and consumption on key markets. AdAge experts write:

Anheuser-Busch InBev will flood the Big Game with eight ads, totalling five-and-a-half minutes, as it uses the largest TV event of the year to try and lift its biggest brands, and the beer category in general, from a prolonged slump.”

The investment comes as the largest beer brands in the U.S. experience worsening trends and have long been in decline. Bud Light and Budweiser, AB InBev’s two largest brands, fell by 6.6% and 6.1% respectively in the year-period ending December 29, according to Nielsen data.

The marketing push into the Super Bowl is AB InBev’s biggest bet on the game in history. In previous years they had bought three-and-a-half minutes for ads. In 2019, the beerhemoth will spread its air time across five brands: Budweiser, Bud Light, Michelob Ultra, Stella Artois and Bon & Viv SpikedSeltzer. There will be one 60-second ad, four 45-second ads and three 30-second commercials according to CNBC, as well as billboards and shorter “bumper” TV ads.

AB InBev has exclusive alcohol promotion rights during the tournament. Thirty-second ad spots were said to cost around $5 million during last year’s Super Bowl. Costs are set to increase in 2019. That means the beer giant is set to spend more than $50 million, for one sports event.

We want to elevate beer, that’s our North Star for everything we’re going to do in the Super Bowl,” says Marcel Marcondes, AB InBev’s U.S. chief marketing officer, per AdAge.

[The Super Bowl] is one of the few moments when [people] are really watching TV.”

There’s no escape: Alcohol promotions in sports, all the time, everywhere

AB InBev’s sports sponsorship agreements touch every corner of the sports world. In 2016, the beerhemoth spend an estimated $350 million on sports sponsorships deals in the U.S. alone, making it the second biggest advertiser in U.S. sports, after Pepsi. It has deals with all major U.S. sports leagues, the National Basketball Association (NBA), the National Football League (NFL) and Major League Basebal (MLB), as well as dozens of team-specific alcohol promotion agreements. And the beer giant never rests in pursuing new advertising avenues, disregarding any societal concerns.

A very recent marketing deal has given AB InBev the rights to put more pro baseball and basketball players in its ads as result of new agreements with the players unions of MLB and the NBA. The pacts are a serious development because professional sports leagues have historically been reluctant to allow active players to promote alcohol. Federal alcohol regulators in the U.S. frown upon any marketing that connects consumption of alcohol with athletic prowess, AdAge reports.

[This is] a game-changing thing in the way we deal with sponsorships,” says Marcel Marcondes, AB InBev’s U.S. chief marketing officer, per AdAge reporting.

Fans are first and foremost connected to currently active players. That is what drives the conversation. This is what influences culture.”

The Super Bowl is not the only event that sees historic amounts of money invested in alcohol promotion. Already the 2018 Football World Cup in Russia saw a gigantic level of advertising spending, never seen before. AB InBev’s ‘Light Up the World Cup’ campaign was driven to more than 50 countries fuelled by the biggest spend ever invested.

[It is] the largest commercial campaign in the history of AB InBev,” said Miguel Patricio AB InBev’s global chief marketing officer, according to The Drum.

[The World Cup is] estimated to be the most watched event in the history of the human race, we are proud to return again.”

According to Forbes, the AB InBev World Cup marketing campaign was set to boost the beer giant’s annual growth. Analysts estimate that Russia would see a rise in beer sales by up to 3%. Notably, Russia implements a ban on alcohol advertising. Beer volumes were also expected to grow in Brazil and Argentina, as well as in South Africa. 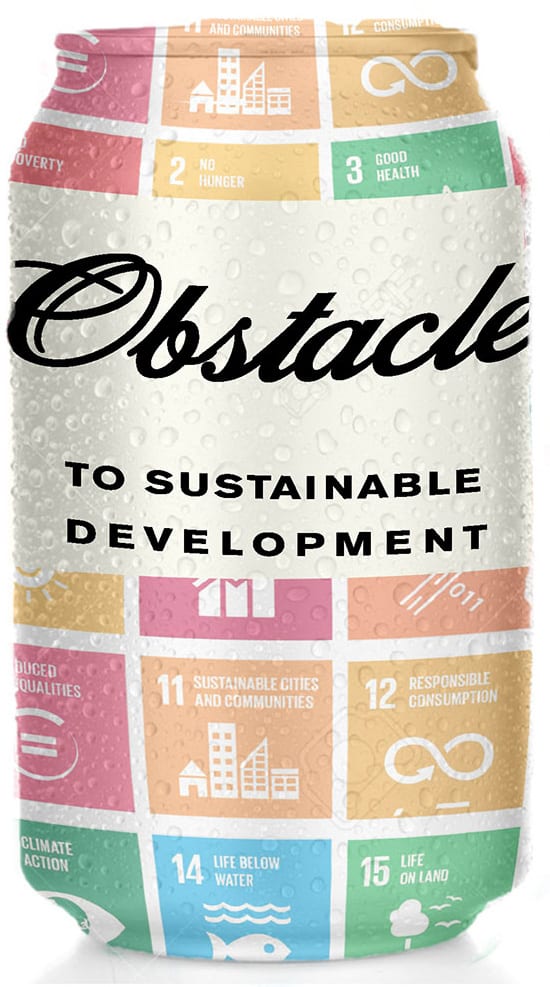 Budweiser brand awareness and sales grew strongly outside North America, in markets like Brazil, China, and the UK, as well as new markets like South Africa, following the aggressive marketing push in advance of and during the Football World Cup.

In recent years, AB InBev has been aggressively pushing to expand its market share in Asia, with a major push in China where it is now the largest foreign beer producer, per The Street. The beerhemoth reported a 1% increase in sales volume in the third quarter of 2018 with the help of a distribution deal with Japanese brewer Sapporo.

But the biggest reason for AB InBev to take over SABMiller in the first place was the promise of extreme growth driven by alcohol consumption in Africa, Euromonitor reported already in 2015. Firstly, the majority of people in sub-saharan Africa does not consume any alcohol. Secondly, the African youth bulge, with young people making up a large part of overall populations in African countries, means there is a key demographic that are seen as potential brand loyal lifetime alcohol consumers. Thirdly, countries in sub-saharan Africa have weak or no alcohol regulations at all and are often poorly governed, which for AB InBev and the rest of Big Alcohol means an absence of threats to future profits through evidence-based alcohol laws. Fourthly, a growing number of people across African countries is entering the middle class, with more disposable incomes to spend on consumption, modelled after people in Western countries. These four reasons make AB InBev thirst for the “emerging market” in developing countries.

These four reasons comprise a big promise to AB InBev investors and shareholders. That is why AB InBev is betting big bucks on Super Bowl advertising. And that’s how alcohol promotion in Super Bowl, World Cup and other sports events is connected to the fallout of the mega-merger and the aggressive growth ambitions of the world’s biggest beer maker.

There’s (at least) one problem, though: Countries in Africa are already now bearing the heaviest burden of alcohol-related disease and injury. And alcohol harm in the other regions is of epidemic proportions (still).