Heineken is gearing up to increase their share and loosen AB InBev’s grip of the South African Beer market in an ongoing turf war between the multinational beer giants.

AB InBev, the world’s largest beer producer, became the dominant brewer in South Africa when it purchased SABMiller in 2016 in a corporate mega-merger. Since the takeover, AB InBev has overhauled its portfolio and increased distribution of non-SAB brands such as Budweiser and Corona. Sales in South Africa, and the wider African beer market, was a key reason for the SABMiller deal.

To compete with AB InBev, Heineken, the second largest beer producer in the world, is gearing up. Recently Heineken invested in its Sedibeng brewery near Johannesburg.

This investment means an aggressive push to increase Heineken beer consumption. The aim is to hit annual capacity of 7 million hectolitres in SouthAfrica. Heineken is also expanding its South African beer portfolio with the addition of low- and no-alcohol brands including Heineken 0.0, Windhoek Lite, Amstel Radler.

South Africa is not the only country in which the two beer giants are waging war. In March, Heineken opened a US$100m brewery in Mozambique, where AB InBev controls 99% of the beer market through the Cervejas De Moçambique unit, also inherited from SABMiller.

There are numerous other examples of the beer giants’ aggressive push for increasing beer sales and relentless competition among themselves. The countries and markets are:

Vietnam, Thailand, Myanmar and other Asian countries are key to the growth prospects of Big Beer. African countries, like South Africa, are emerging markets with their youthful population are supposed to become the bedrock of windfall profits for Big Alcohol, as nations where the majority of people is not using alcohol.

To convert people in African and Asian countries to alcohol consumption, the beer wars are fueled by a whole host of deeply unethical practices and tactics:

The damage from the beer war is felt by South Africans, who suffer one of the heaviest alcohol burdens in the African region as well as the world. 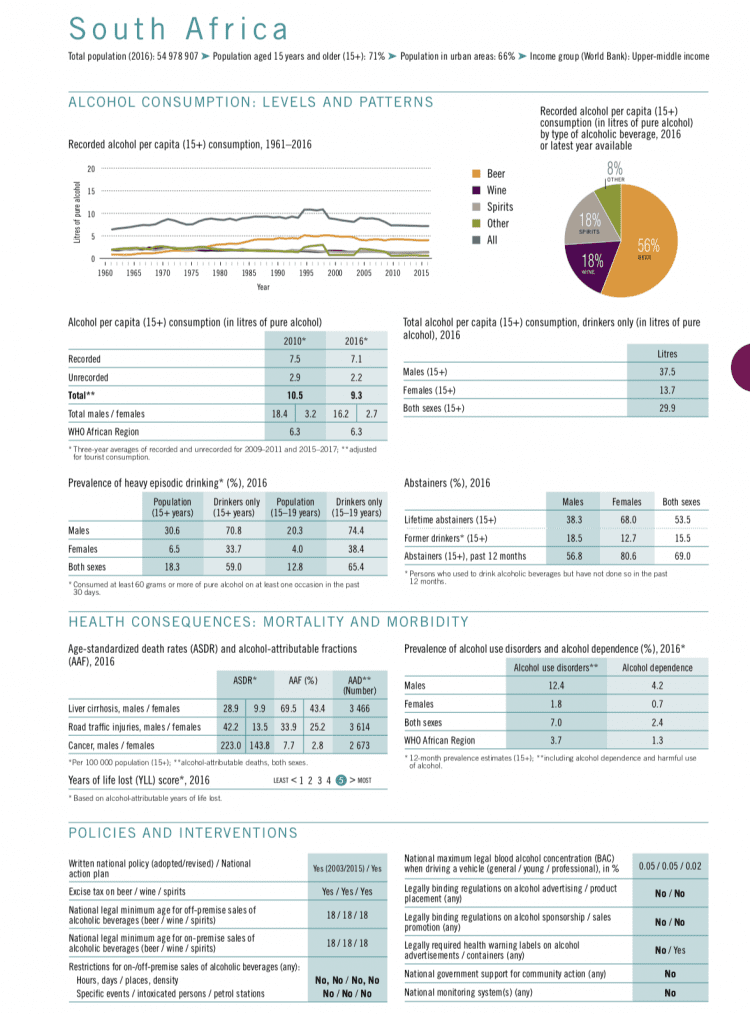 According to WHO data,

South Africa has one of the highest years of life lost due to alcohol scores in the world. Annually alcohol causes,

12.4% men and 7% both men and women in South Africa suffer from alcohol use disorders. A further 2.4% of the population is dependent on alcohol. All these statistics are above the average of the WHO African region.

Heineken’s burden in Africa doesn’t stop at the negative impact on public health. Journalist Olivier van Beemen exposes compelling evidence and stories of the unethical practices of the Dutch beer giant Heineken in the book “Heineken in Africa”.

Among the grave violations committed by Heineken in the African region are the following (and more):

Heineken’s disregard for human life and ethics are obvious. Their only priority is profit, over everything else. Importantly, the book details Heineken’s practices with profound evidence but it stands to assume that other beer giants and multinational corporations are likely employing similar tactics and business practices.

Vietnam, Asia’s third-largest beer consumer after China and Japan, has seen beer volumes climb by an average 6.6% for the last six years compared to an increase of “just” 0.2% for consumption globally.

Amnesty International has called for an urgent investigation by Japanese authorities into payments that a subsidiary of the multinational brewing giant Kirin made to Myanmar’s military and authorities at the height of an ethnic cleansing campaign against the Rohingya population in the fall of 2017.

A new landmark scientific study shows that alcohol use is rising across much of the Asia region. Even heavy episodic (binge) alcohol use has increased significantly in China, Thailand, Timor Leste and Vietnam, according to new research.

A raging beer marketing war in Ivory Coast between Heineken-owned Brassivoire and Castel-owned Solibra is putting children and youth in harms way.

Rwanda: Heineken To Sell Beer Below $1

The European Commission has fined beer giant AB InBev for trade violations. The world’s largest beer maker was fined €200.4 million for price fixing by hindering cheaper imports of its Jupiler beer from the Netherlands into Belgium.