Towards An Alcohol-Free Kerala?

by Johnson Edayaranmula Posted on August 28, 2014 in
Alcohol's Harm To Others, Civil Society, Policy, Prevention, Recovery

An insight into the advocacy initiatives in the State of Kerala, India reversing the trend of increasing alcohol use and putting Kerala on track to become free from alcohol harm…

KERALA – the southernmost State in India, with a population of 33.5 million and which is known for its highest per-capita consumption of Alcohol in the country, has officially adopted Prohibition Policy – will we see and alcohol-free Kerala in the future?

The State Government has decided to shut down over 730 Liquor Bars and Sundays have been declared as “Dry Days”. Apart from this, the Government has also announced that 10% of the Kerala State Beverages Corporation Liquor Outlets will be closed down each year and in 10 years Total Prohibition will be implemented in Kerala.

During the past few years both the International and National Media have been highlighting about the growing alcoholism in Kerala. The State, known for its high Human Development Index in spite of a low Per Capita Income and lower Gross Domestic Product, has been facing a growing alcohol problem. 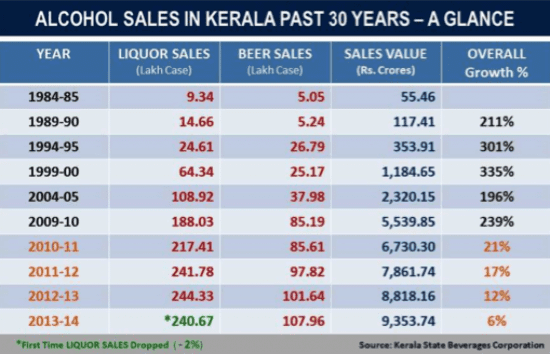 Alcohol Sales in Kerala, past 30 years 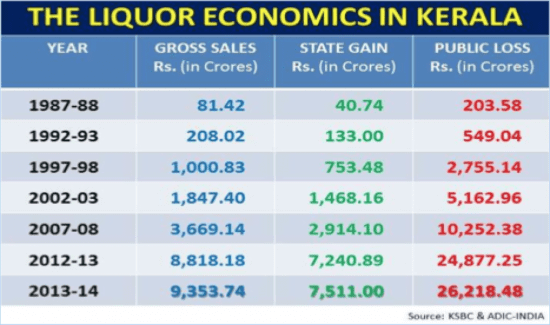 Economics of alcohol harm in Kerala

Hence this Government’s decision is a victory for Alcohol Policy Advocates in the State. For the past 40 years the Temperance Movement in Kerala and the Faith Organizations have been strongly advocating for Total Prohibition in the State. During the last 25 years the Alcohol & Drug Information Centre (ADIC)-India has been playing a very significant role in Kerala through its multi-faceted concerted efforts and innovative programmes, involving all concerned stakeholders. 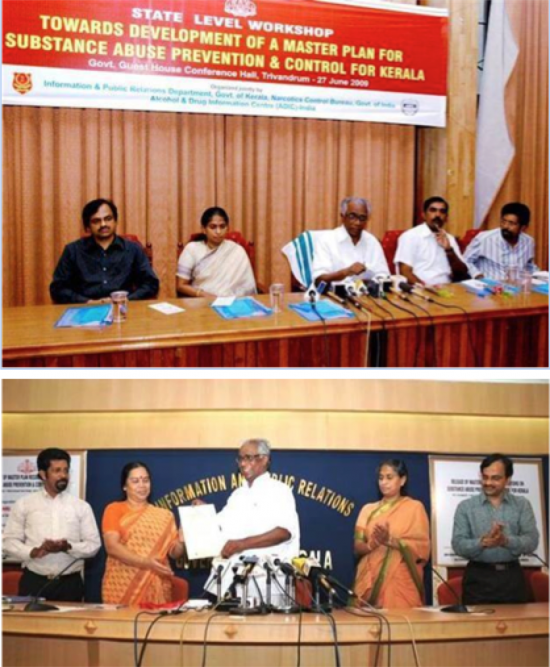 The most significant revolution in Kerala was the launch of “MADUMUKTHI” – A Pilot Project on Empowering Communities against Alcohol, Tobacco and Other Substances, conceived by ADIC-India and implemented as a joint initiative of the Dept. of Health, Kudumbashree State Mission and ADIC-India with the cooperation of the Departments of Social Justice, Local Self Government, Excise, Police, Youth Affairs, Information & Public Relations and concerned NGOs targeting 140 Local Self Government Institutions, 7,00,000 Families and 30,00,000 People covering all the 14 Districts of Kerala in 2013-14, with 100% funding from the Government. 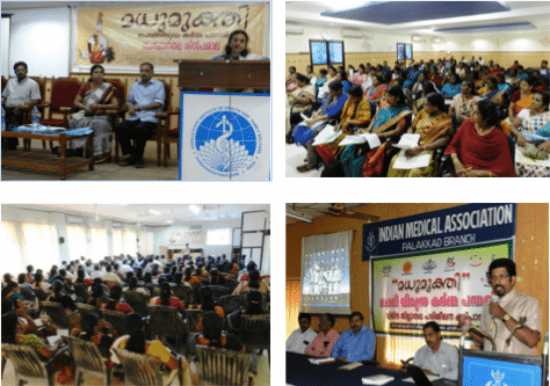 The outcome was overwhelming. For the first time in the history of Kerala, alcohol sales showed a reverse trend in the Financial Year which ended on 31st March 2014, with Liquor Sales dipped by 2% than the previous year, against a past uniform trend of 12% – 67% annual growth.  Actually, it was ‘Madumukthi’, which changed the ‘alcohol phase’ of Kerala, by creating a mass momentum for strong alcohol control policy.

Fortunately, it was during the same period the Comptroller and Audit General has come with a report questioning the status and conditions of 418 Bars, based on a 2007 Report of the then Excise Commissioner. The Judiciary then intervened and under the direction of the Honourable Supreme Court of India the Government of Kerala was forced to close down the 418 Bars with effect from 1st April 2014.

This was an unexpected boost for the Temperance Movements and Faith Organizations in the State. They demanded the permanent closure of the 418 Bars.

ADIC-India made positive use of the situation by convening an “Open Forum on Alcohol Policy”, in the State Capital by bringing in all concerned stakeholders on a common platform jointly with the Regional Resource Training Centre of the Ministry of Social Justice & Empowerment, Govt. of India and FINGODAP Kerala Chapter.  The Open Forum urged the Government to adopt a ‘people welfare oriented alcohol policy’ focusing on raising the standard of living and improvement of public health as enshrined in Article 47 of the ‘Directive Principles of the Constitution of India’ and in tune with the ‘WHO Global Alcohol Strategy’ and the ‘UN Resolution on Non Communicable Diseases’.

This generated a series of Media Discussions and Dialogues in the State. We could succeed in even influencing Key Political Leaders including some of the Ministers in the Kerala Government towards strong alcohol control policy. And finally the Government was convinced to adopt the Prohibition Policy.

And now the biggest challenge before us is to see that the Policy is successfully implemented in the State on a time-bound manner. We are now involved in launching the First Phase of the Madumukthi Project in all the 14 Districts in Kerala targeting 210 Local Self Government Institutions, a million Households  and 4000000 people.

Bengal Hooch Tragedy: More Than 150 People Died, 350 Are In Hospital

Get to know Johnson

Other recent posts by Johnson Edayaranmula