by Teurai Rwafa Posted on September 30, 2015 in
Alcohol Industry, Obstacle To Development, Policy

The police are reporting most crimes in residential areas to be alcohol-related. The writer notes with concern that it is because of such societal damages that alcohol consumption really needs to be curbed. But, as this blog post explores, taking action on alcohol remains a matter of political will. Will action to curb alcohol consumption in Namibia be taken?

On recent news a consumer rights activist in Namibia wrote a very interesting piece addressing the issue of alcohol. In the article, the writer talked about the Namibian President logging for shebeens to be moved out of residential areas, as there is high shebeen density – given that reducing outlet density is one of best alcohol policy best buys towards strategies to reduce alcohol-related harms, as it decreases alcohol availability.

The police are reporting most crimes in residential areas to be alcohol-related. The writer notes with concern that it is because of such societal damages that alcohol consumption really needs to be curbed.

Namibia does not have a policy on alcohol consumption, according to the World Health Organisation (WHO), whilst Licensing systems and enforcement (in lieu of government monopoly on sales) is a alcohol policy best buy. 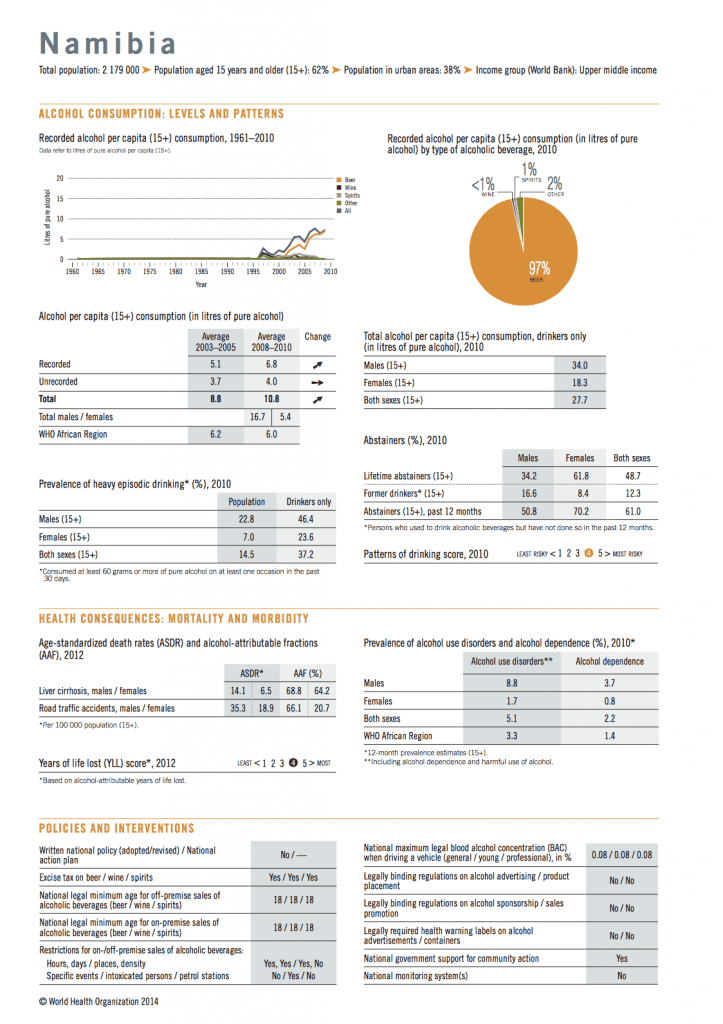 This means there is the presence of uncontrolled shebeen opening hours, the presence of illegally operating shebeens, as well as most residents in Windhoek not being aware of the right they possess to report problematic shebeens to police. Hence, policies to override the present alcohol status quo in Namibia through introducing strategies that reduce alcohol-related harm are in need.

Barriers to health-promoting alcohol policy in Namibia are not only limited to shebeen presence, but include political resistance…through influence of the alcohol industry. Unfortunately, there are no known bans on advertising and sponsorships by alcohol producers and distributors. Alcohol consumption is promoted through sponsorship of the national soccer team and advertising on NBC.

Quite frankly, a questionable relationship seems to exist between the Namibian government and Ohlthaver and List (O&L) – the owner of Namibia Breweries, which reportedly “donates” beer annually to the government through the minister of foreign affairs for distribution to their mission abroad.

Banning advertising and sponsorship of alcohol is another best buy. But the significant risk of conflict of interest on the government’s part due to accepting a “donation” from the alcohol industry, there will be no control of alcohol promotion or marketing.

….As it is said, taking action on alcohol remains a matter of political will. Will action to curb alcohol consumption in Namibia be taken?

Hello dear friends and welcome to my blog corner!
I hold a BSc Degree in Health Education and Health Promotion and I’m currently enrolled as a Master’s student in Public Health in the field of social and behaviour change communication.
I’m a fanatic for detail – that’s my weakness.
Alcohol and other narcotics harm a lot of children’s lives; in lower economic situations they take away the little family money available for food as care givers give in to their addictions.