Plenty of people, especially children and youth, are among the viewership who find their heroes and idols and role models in the players. Even for me, who doesn’t usually care about American football, I find players I like and players I dislike…

American football is an exciting sport for many people. The NFL is a huge business. The Super Bowl is among the most-watched sporting events in the world. Super Bowl 50 was the third most watched broadcast in U.S. television history averaging 111.9 million TV viewers. And mind you, this number means actually a slight decline from 2015 record viewership of 114.4 million, making Super Bowl XLIX the most-watched television program in U.S. history.

Plenty of people, especially children and youth, are among the viewership who find their heroes and idols and role models in the players.

Even for me, who doesn’t usually care about American football, I find players I like and players I dislike.

The star of the game was certainly Peyton Manning. Having played 18 seasons in the NFL and Super Bowl 50 being his potentially final game of the career, brought him much attention in the lead up. Winning the game turned even more spotlights on him. But what stood out – remarkably for a sports broadcast – was Manning’s post-game name dropping of a beer brand.

The entire week has since been about the product placement by victorious quarterback Manning in his postgame interview with CBS’ Tracy Wolfson:

I’m going to drink a lot of Budweiser tonight, Tracy. I promise you that.”

Manning, 39 years of age, knows fully well that active NFL players are not allowed to endorse and promote alcohol brands. For that matter, it was not the first time that he name-dropped the brand. In 2014, after a playoffs victory, Manning said on TV:

What’s weighing on my mind is how soon I can get a Bud Light in my mouth.”

According to Apex MG Analytics, the two mentions after Super Bowl 50 are worth $3.2 million in equivalent advertising time for ABInBev, the owner of the Budweiser brand.

An ABInBev spokesperson declined that Manning was paid for the product placement but said that the brand was sending 50 cases of Budweiser, which is 1,200 bottles of beer, to the team’s after party.

But Mr Manning received even more because the Brewers Association entered the competition for public attention (and brand exposure) by sending him craft beer. 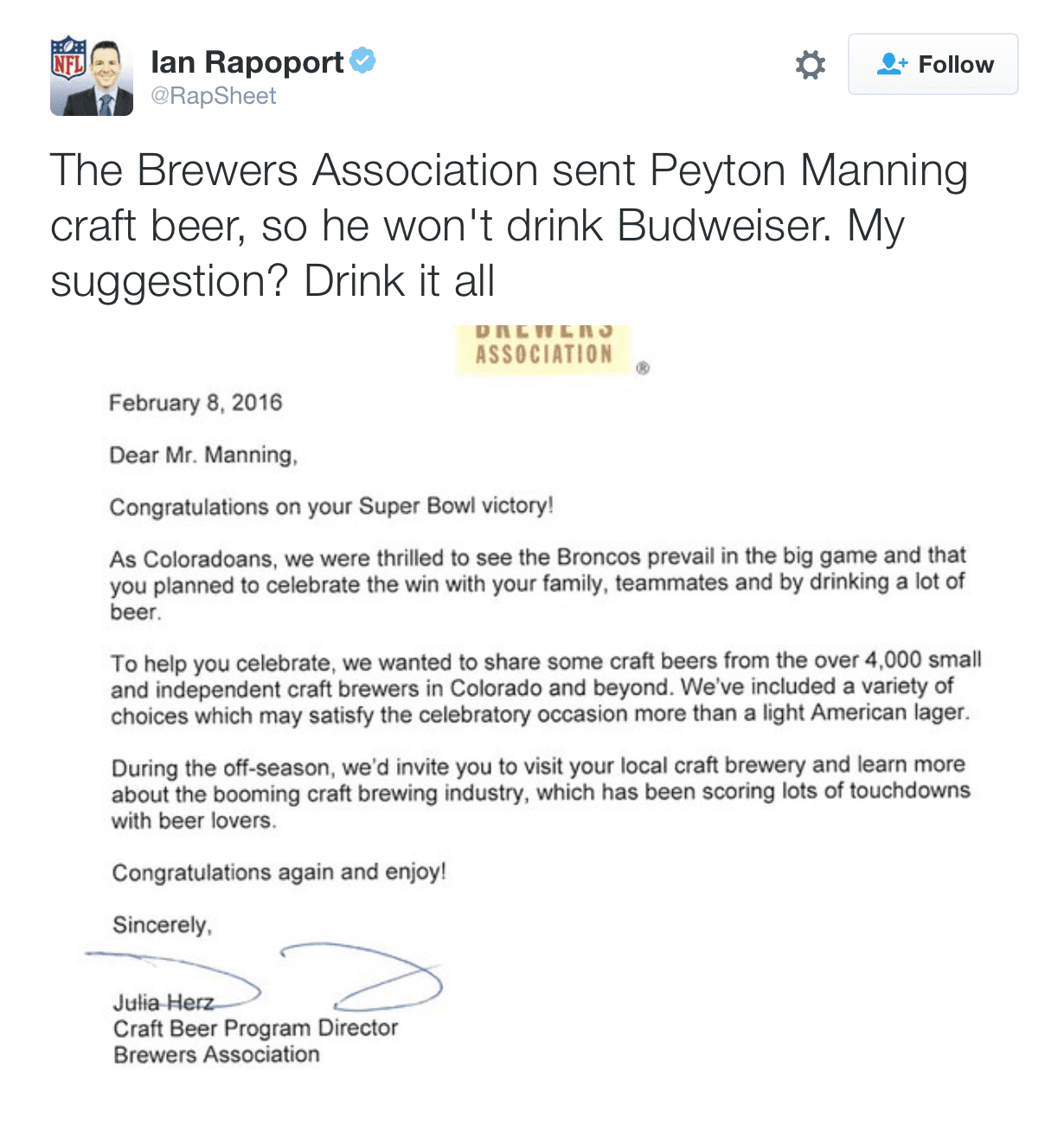 That these things matter, that they mean more profits for alcohol companies can be seen from the attempt of the craft beer industry to get into the game themselves. And it can be seen in the fact that last year, ABInBev paid $9 million for a one minute Super Bowl ad, or in the fact that they just renewed their sponsorship agreement with the NFL for a record-breaking deal worth $1.4 billion. But ABInBev is confident about their investment:

We’ve done the math and wouldn’t be renewing this sponsorship if we didn’t believe this would allow us to sell more beer,” Anheuser-Busch executive Lucas Herscovici said, per NBC sports.

So, while ABInBev  is enjoying the filling of its cash coffers, children and youth are exposed to alcohol marketing. While Mr Manning and ABInBev enjoy the attention and benefits of alcohol advertising, the American society struggles with the burden of addiction.

According the data from the National Institute on Alcohol Abuse and Alcoholism, almost 88,000 Americans die from alcohol-related causes every year, making it the third leading preventable cause of death in the United States. 16.6 million adults ages 18 and older (7% of this age group) suffer from alcohol use disorder. And alcohol misuse problems cost the United States $223.5 billion. Almost 75% of the total cost of alcohol misuse is related to binge alcohol consumption.

That’s the story we need to talk about. The alcohol industry rakes in profits, aided by the NFL (and other major pro sports leagues), through targeting children and youth and glamorizing alcohol. Consider this fact: Kids who scored highest on familiarity with alcohol ads were more than four times more likely to take up binge alcohol intake compared to low scoring peers.

The leader of the opposing team, Cam Newton, is a different person compared to Mr Manning. He does not willfully put children and youth in harms way just for a quick buck and/ or beer.

Mr Newton meditates, doesn’t eat meat, and has never had a sip of alcohol. But such a lifestyle is much less newsworthy, doesn’t get you the attention of Twitter and sports journalists. But in the entertainment section of “Glamour” I found this conversation:

GLAMOUR: Did you always have your heart set on football?

CAM NEWTON: Definitely. People tell you not to put all your eggs in one basket, but if a person has a fallback plan, failing is an option. And it never was for me.

GLAMOUR: As first pick in the 2011 draft, how’d you celebrate?

CN: I told myself I’d take my first sip of alcohol if I ever got drafted. My friends brought over the biggest bottle they could find, but I said, “Cam, if you’ve gotten this far without drinking, just imagine how much farther you can go if you continue not drinking.” So I decided I’ll take my first sip when I get married.”

Shouldn’t the NFL promote this type of role model and behavior? I hope Newton makes it to the Super Bowl next year again, hopefully winning the game – and maybe that will bring wider attention to the fact that sports glory, high-level performance and victory parties should rather be alcohol-free. 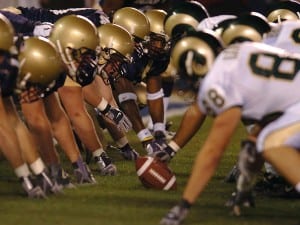 When millions in the USA and around the world gather to follow the 49th Super Bowl, a lot will be on the line – more than you’d think.

The welfare and well-being of our children will be on the line, and this article explains how and why… 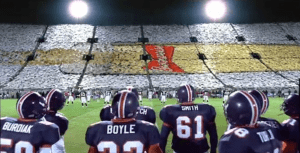 Let’s not be fooled by Helen Mirren’s ranting and ABInBev’s attempt to appear “responsible”. Budweiser has fumbled its ad messages and exposed itself…