Can Consumer Whisperers Be Agents Of Change?

When I read a Glamour article about the new CEO of Absolut Vodka Ann Mukherjee, I found all the right statements there. Already the first paragraph starts with citing NIAAA with a fact that sexual assault is more likely to occur in situations where alcohol was consumed.

Reading on, more factual information is mentioned such as statistics on how many sexual assaults at college campuses happened after the perpetrator or the victim or both consumed alcohol.

Declarations such as “drinking is not an excuse for crime” or that “perpetrators take advantage of those situations (when women are intoxicated) and do not respect consent” make every women’s rights defender nod.

Personal story that will make us believe the pure intention – check

Cynically and sadly, Absolut’s parent company is member of the Distilled Spirits Council of the United States (DISCUS) lobbying AGAINST life-saving alcohol policy measures, such as alcohol tax increases, that could PREVENT alcohol harm, including DUI fatalities.

But back to the main story: the combination of facts and the negative personal experience with alcohol from the victim’s point of view are the backdrop for the new ad campaign run by Absolut vodka that goes beyond the usual “Drink Responsibly” action. The “upgrade” says: Sex responsibly.

The campaign went public on February 14. There were billboards, newspaper ads and Time Square screens showing the notorious Absolut bottle with the message: “Drink Responsibly” accompanied by messages clearly stating that only a yes is consent to sex. Any other behaviors such as making out, consuming alcohol together or binging on tv-series together, that could possibly be interpreted as a yes are not consent.

The CEO continues sharing her life story. For example, she mentions her teenage children who approve of the campaign and confirm what we have been learning about the Generation Z recently. Young people today demand responsibility and prefer collective action that is good for the world instead of just following their own individual needs. That is why they obviously endorse the attempt to open the conversation about “responsibility” even when inebriated.

Cooperation with an NGO for a higher cause – check

And last but not least, the article presents the partnership between Absolut and RAINN (Rape, Abuse and Incest National Network) not only for the development of the campaign but also by including the Mrs Mukherjee in RAINN’s national board.

To sum it up, the article presents us with the following:

And I wish we could celebrate that Absolut opens for the conversation about consent BUT where has the company been until now? And is Absolut actually serious about the issue or just using a “popular” topic for marketing and sales purposes?

The conversation about consent is not a new one by any means. It has been going on in times when Absolut and their parent company Pernod Ricard were aggressively feeding the popular ethos of male superiority that gives men the permission to demonstrate power over the other sex. 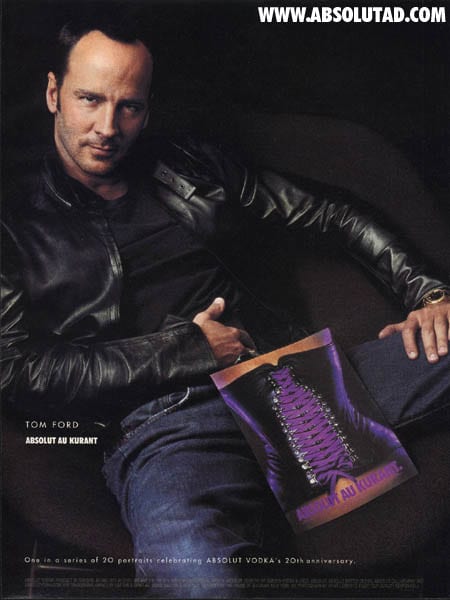 I see the new campaign as an obvious attempt to speak to the values of (and target) the women’s rights movement and young people. This is not an agenda setting. This is “taking up” the topic when the ”air is clear” to do so. When others many years prior have already done the unpopular job of bringing up the “revolutionary” idea that both parts need to actively agree to having sex at the very moment of the intercourse.

Without reflecting on past practices of this Big Alcohol giant, it must be refreshing for every women’s right defender to hear an alcohol producer say that any sexual assault is the perpetrator’s responsibility. While I agree with that, I can’t ignore the discrete disappearance of the “criminal from the crime scene”. The company’s lobbying to weaken and undermine actually impactful gender-based violence prevention measures can’t be unseen and cannot be undone.

Absolut, Pernod Ricard and their buddies in the IARD are actively undermining policies, that lead to reduced gender-based violence. The industry is making sure that banning alcohol advertising or regulating marketing – measures that make a real difference for women’s health, rights and lives – are not introduced. Heavy lobbying against alcohol tax increases that is proven to contribute to less violence is well documented. These measures are constantly challenged and fought against by alcohol companies, including Absolut, when governments make attempts to even formulate or implement them.

100 years ago, alcohol companies have fought tooth and nail against women’s (voting) rights putting their private profit interests over women’s human rights. Nowadays, alcohol companies are (ab)using feminist language and values in their PR but continue the cynical fight against any effective alcohol policy measure that would improve the health, safety, and equality of women and girls.

A PR campaign or a difficult conversation?

A seasonal campaign about consent (there are no traces of similar action by Absolut on other days of the year than February 14) won’t make a difference for women exposed to psychological and physical violence by men who have felt encouraged by alcohol ads boosting their macho ego over decades. 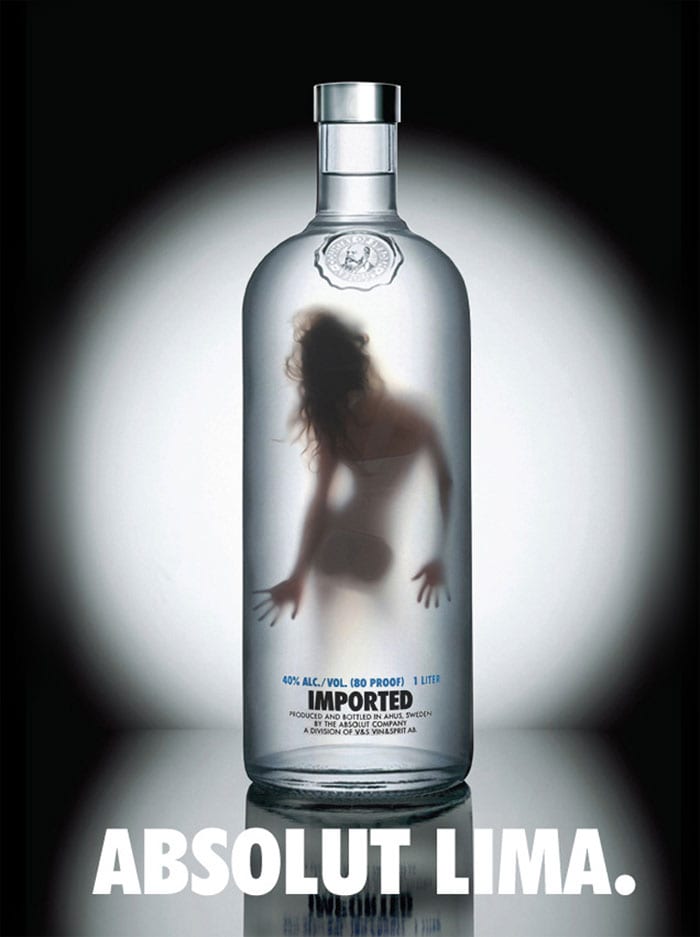 Furthermore, we need to understand that the campaign is first of all an advertisement for the product, associating Absolut with various stages of intimate and sexual behavior. So making out, having a drink, binge watching and chilling together is still supposed to happen while consuming Absolut. And then… when it comes to sex, it is supposed to be done “responsibly”. It is every individual’s responsibility.

We know very well, that the norms around alcohol encourage and justify violent acts and we also know that the way women and men are portrayed in alcohol marketing fuels harmful masculinity. For decades, we have all been subjected to alcohol ads that have been objectifying, sexualizing and de-humanizing women. These ads, commercials, images and messages have perpetuated a common belief about masculine superiority over females. They have played a central role in this toxic and harmful culture for women and girls.

These products, practices and the CEOs that authorize them are RESPONSIBLE for alcohol-fueled gender-based violence. The science is unimpeachable:

Let’s forget the past

But maybe I should ignore all that evidence. Maybe I should look past this horrific track record of Big Alcohol dehumanizing women. Maybe we live in different times now.

One could say that everyone learns and the people running the companies that produce alcohol nowadays are not the same people as some years ago. Shouldn’t we appreciate the change in their communications instead and support it or at least give Big Alcohol the benefit of the doubt?

So I checked the latest messages of Absolut.

Their videos with Rico, a bartender mixing alcoholic drinks, are latest proof that nothing has changed. When Rico explains the history of an alcoholic drink called Espresso Martini, he shares a little story of how it came about. “…a super model came (to a bar) and asked for a drink that will wake her up and f*ck her up at the same time”. 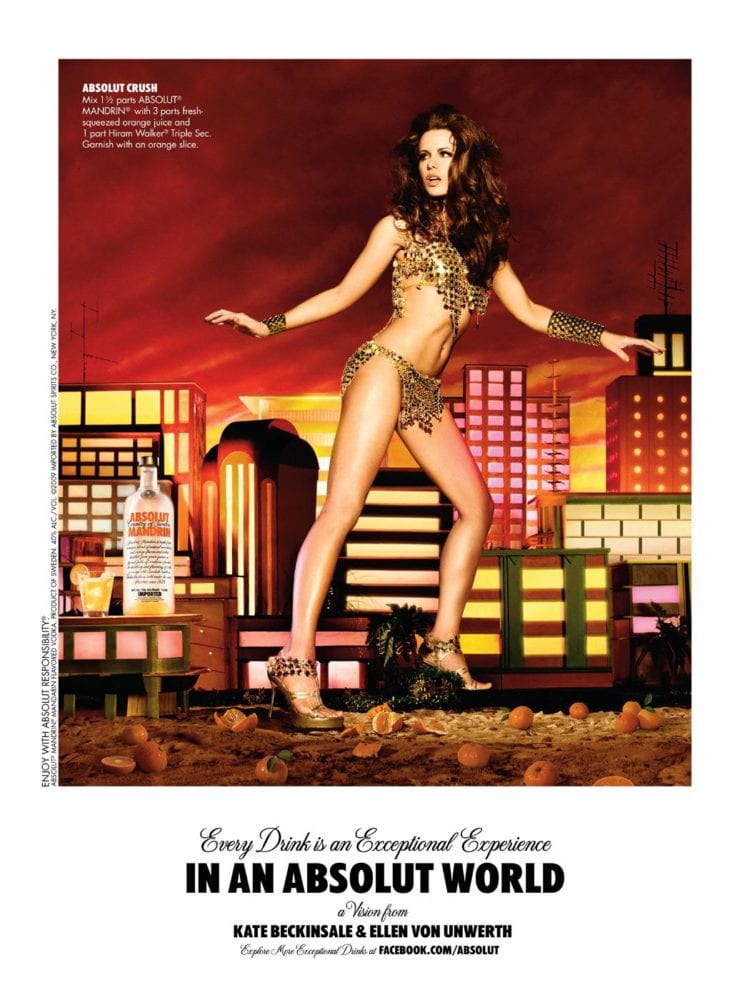 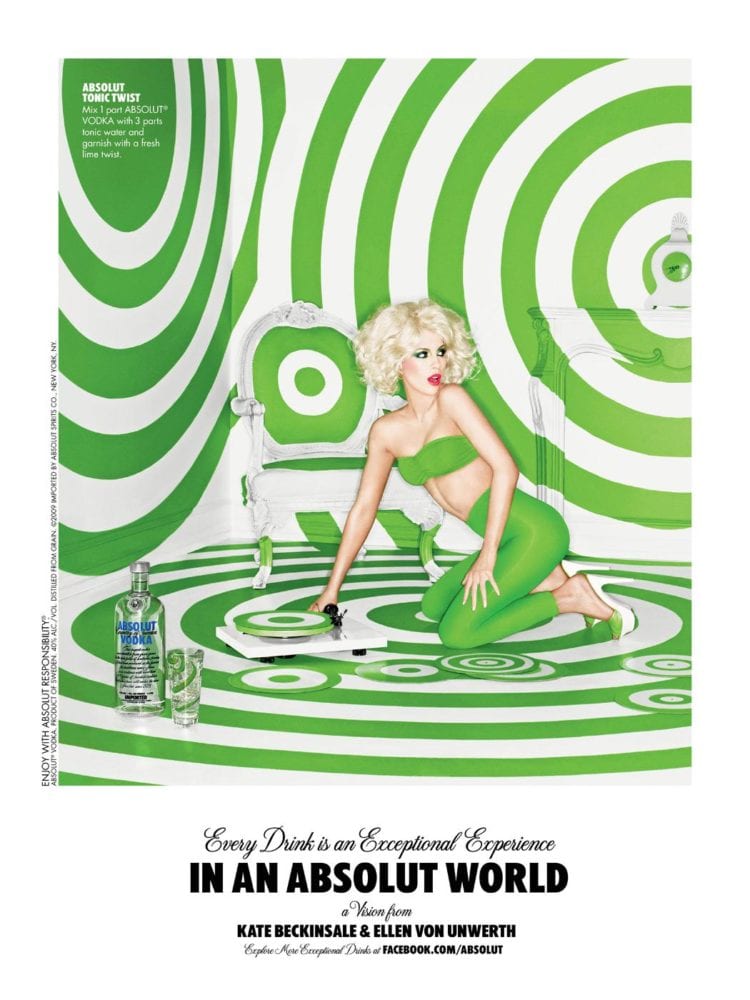 In the beginning of another video of the same kind there comes a phrase: “we are drinking responsibly but don’t think this is a boring show”. The company contradicts itself and just proves what common sense and evidence tell us – the “responsibility” messages do not work. Responsibility as presented by the industry is not defined and lacks any reference to official guidelines. Those who chose to use alcohol for the purpose of occasions the use is advertised for, do not want to bother with responsibility anyway. The company “helps” their target group to understand responsibility in terms that benefit the bottom line, not alcohol harm awareness.

For example when Rico continues to explain the meaning to the “Drink Responsibly” message saying: “Always drink with a friend because that’s responsible.” In addition to that, he defines for us what the amount of Absolut (40%) in one drink should be. We get to hear: “45ml will make all your drinks taste well”. That is almost 2 units of alcohol (1 unit = 25 ml spirit) which is the maximum “recommended” amount per day a person should consume to stay within the low-risk range. And surely, nobody who has seen how the alcohol norm looks like would believe that Absolut and Rico mean that consumers should stop after this one alcohol drink. The message to “have only one glass” never occurs in any of the videos or ads or Absolut promotions telling people “Please drink responsibly”.

The consumer whisperer at Absolut service

The personal story of Mrs Mukherjee makes the reader believe that she sincerely cares and anyone who questions her use of the story would be a cruel person.

Mukherjee sees it as her job – and the job of the brands she leads – to help people understand the truth,” reads the Glamour article.

When looking at her employment history, between 1994 and 2014 she was (very successfully) working in the field of marketing of unhealthy products: first for Kraft, then for PepsiCo. By some she is called ”consumer whisperer” as she is always in line with the latest trends in marketing.

According to Mrs Murkherjee, research has shown that 76% of purchase decisions are influenced before consumers even start shopping, primarily in the forms of social media and consumer written reviews. It is clear that SexResponsibly is just another way to build relations to the “new” target group of the alcohol industry: women, fighting for their rights and equality as well as the youth of today, socially conscious and responsible young people who are not afraid to discuss moral issues. 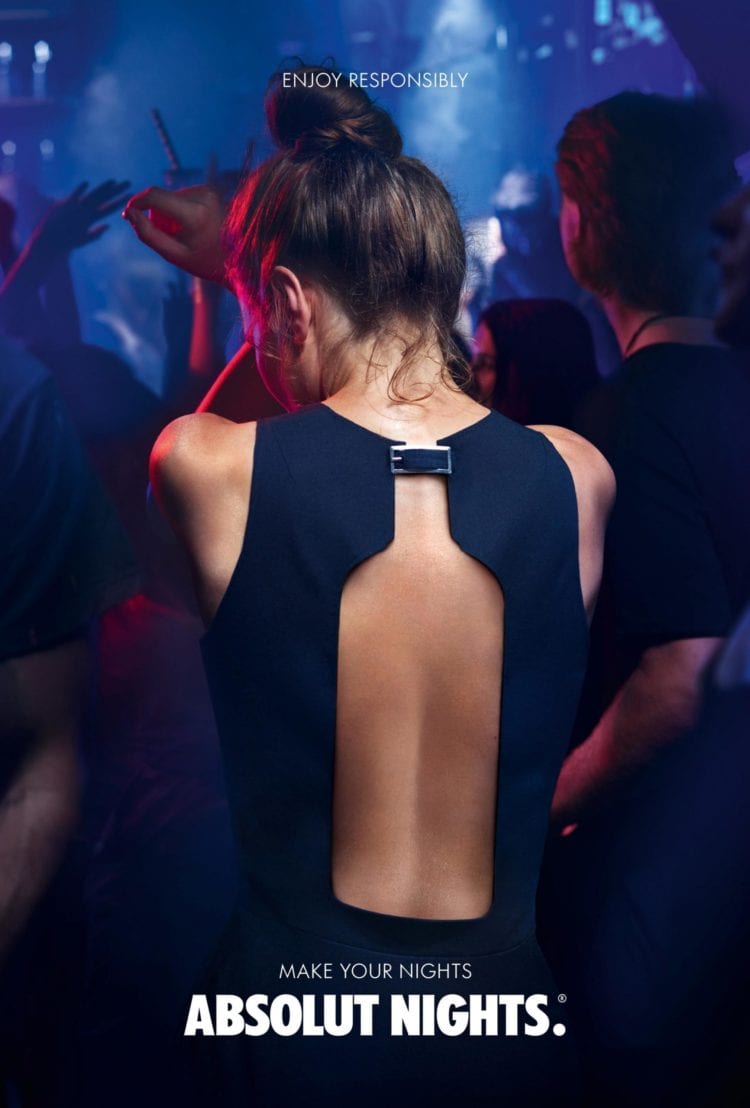 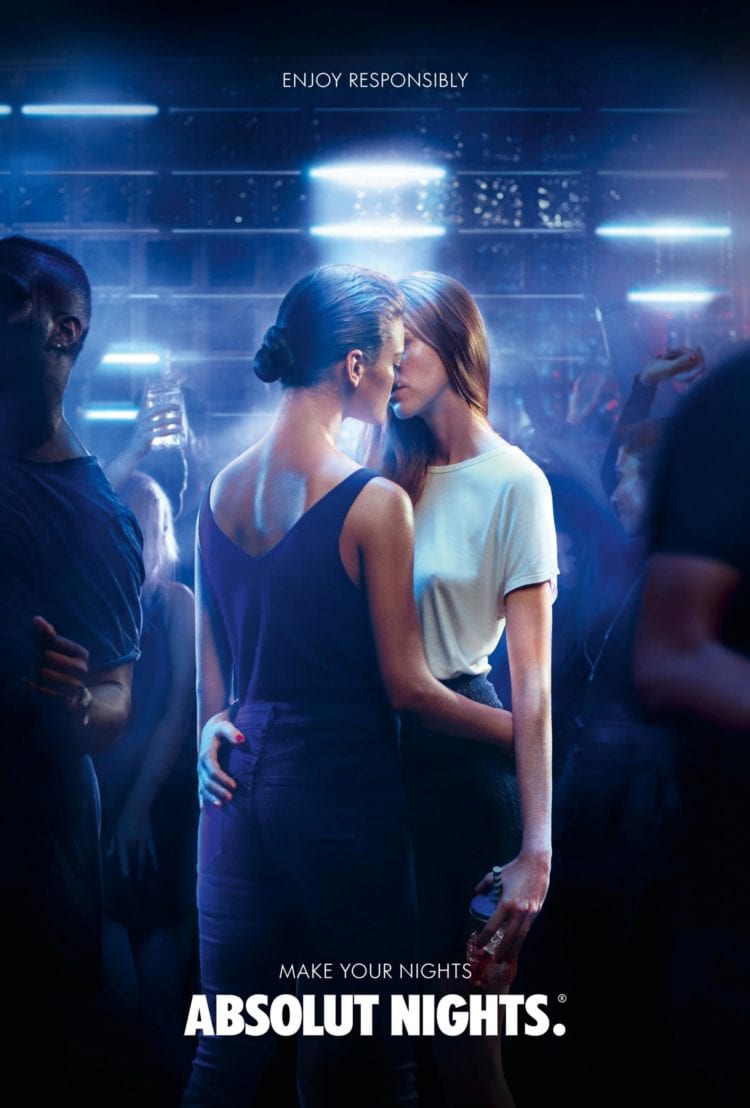 I am not going to celebrate this orange-washing (orange is the color for raising awareness about gender-based violence) campaign until the company shows that they really care by letting decision makers do their job and implement the most effective and impactful policies that reduce the prevalence of sexual assaults and other types of (alcohol-fueled) violence against women.

I will be the first one to celebrate when Absolut convinces the IARD and together they will make sure that prices of alcohol are high enough to cover the societal and public health costs, that alcohol is sold in designated areas and shops that are capable to regulate opening hours and complying with the legal age limits. I will celebrate when there won’t be alcohol ads and various sponsored influencers targeting women and youth blatantly through digital media, ignoring rules and regulations that were put in place to protect vulnerable groups. Mrs. Murkherjee, as “consumer whisperer” knows fully well that a campaign like SexResponsibly is not effective in actually reducing alcohol harm; but it’s effective from Absolut’s point of view in terms of brand promotion.

Real change doesn’t come from corporate campaigns, no matter the back story. Real change has to be won, as the women’s rights heroes did a hundred years ago, by activists and community leaders that can’t be fooled by Big Alcohol’s money and PR savvy. Women’s rights, female empowerment and gender equality are too important and we have come too far – despite the opposition of Big Alcohol – that we will now allow the alcohol industry to buy their way into it and throw us off course. Real change is systemic, is in policies and laws implemented. We will not be fooled by consumer whisperers. We are citizens.

Sexism Epitomized In One Alcohol Label

Sexism Epitomised In One Alcohol Label