On World Cancer Day, WHO released World Cancer Report 2014 showing a scary picture of the global surge of cancer. Alcohol plays a major role in the epidemic that is fuelled by Big Alcohol. Prevention measures must be implemented to turn the tide, save lives and improve lifestyles of millions. And four facts are crucial in this mission…

Last year, on World Cancer Day, IOGT International and the Union for International Cancer Control (UICC) issued a press release together. Mr. Cary Adams, Chief Executive Officer of the UICC and myself addressed four facts that decision-makers needed to get right.

What has happened in a year’s time?

The answer, I am afraid, is not encouraging. Today the International Agency for Research on Cancer (IARC), the specialized cancer agency of the World Health Organization, has launched World Cancer Report 2014, a collaboration of over 250 leading scientists from more than 40 countries, describing multiple aspects of cancer research and control.

The headline capturing the sentiment best comes from The Guardian:

We have not been advancing. We are falling behind and cancer, one of the four major noncommunicable diseases (NCDs) burdening the world, is actually turning into an epidemic. These are the numbers from the World Cancer Report:

Some of these forms of cancers mentioned above are alcohol-related, especially stomach (colon and rectum and large bowel) liver and breast cancer.

The role of Big Alcohol must be addressed. Like Big Tobacco, the global alcohol industry is aggressively promoting their product in its thirst for ever more profits.

Dr. Margaret Chan, Director-General of the WHO writes in the introduction to the World Cancer Report 2014 that there are increasingly cancers associated with the lifestyles of more affluent countries “with increasing use of tobacco, consumption of alcohol and highly processed foods and lack of physical activity.”

Glamorizing alcohol and its effects, and perpetuating myths about alcohol and the “lifestyle” it is supposed to be associated with are two ways in which Big Alcohol actually drives the cancer epidemic because alcohol is not a magic drink but a toxic, and carcinogenic substance. The aggressive promotion of “industrialised lifestyles” – as the World Cancer Report 2014 calls them – is not the only tool Big Alcohol is using. They also mount aggressive lobby campaigns to stop, obstruct and even dismantle evidence-based public health policies, like higher taxes on alcohol, less availability of alcohol and straitly regulated marketing or advertising bans.

As a matter of fact: about half of all cancers could be avoided if current knowledge was adequately implemented. Take the word of Dr. Stewart, from the IARC press release today:

Despite exciting advances, the report shows that we cannot treat our way out of the cancer problem. More commitment to prevention and early detection is desperately needed in order to complement improved treatments and address the alarming rise in the cancer burden globally.

Adequate legislation can encourage healthier behaviour, as well as having its recognized role in protecting people from workplace hazards and environmental pollutants. In low- and middle- income countries, it is critical that governments commit to enforcing regulatory measures to protect their populations and implement cancer prevention plans.

Governments must show political commitment to progressively step up the implementation of high-quality screening and early detection programmes, which are an investment rather than a cost,” says Dr Bernard W. Stewart, co-editor of World Cancer Report 2014.

World Cancer Day is an important opportunity to address and highlight four important facts – which decision-makers and the broader public should get right:

A European Union study showed that on average only 36% of the people know about alcohol’s role in cancer. Too many people around the world still believe in the health benefits of alcohol but evidence shows that there is no safe amount of alcohol use. No matter if beer, whine or liquor is used – it’s the alcohol that increases the risk for cancer. Researchers also point out that recommended units for alcohol use are way off the mark. Maximum one glass of alcohol per year would be risk free consumption.

The more alcohol consumed, the bigger gets the risk for cancer. And really, who would for example use a pill against insomnia or high blood pressure, if they knew it caused cancer at the same time?” That was my question in last year’s press release and surely it is still important to ask.

Thousands of cancer cases are correlated with alcohol use

The European AMPHORA project, a research project financed by the European Commission, calculates that 136 000 new cases of cancer in EU, yearly, are caused by alcohol use. Even a conservative projection of these findings for other regions in the world makes it clear: Hundreds of thousands of cancer cases around the world are alcohol related.

Cancer will touch us all at some point in our lives. On World Cancer Day, UICC urges everyone to make simple lifestyle changes to reduce their cancer risk and that of their loved ones, ” says Mr. Cary Adams, Chief Executive Officer of the Union for International Cancer Control (UICC).

The IARC estimates (a study in France) that alcohol lies behind 8% of all cases of cancer: 11% in men and 5% in women. After tobacco (18%), alcohol is therefore the second biggest cause of cancer, long before other risk factors infections (3%), physical inactivity, or sunlight.
Just like the activities of the tobacco industry, so do the activities of the global alcohol industry have huge negative consequences for the people in the world. And due to this obvious conflict of interest Big Alcohol should not be part of public health policy processes.

The global costs of cancer in 2010 were $290 Billion and it is projected that the costs would increase to $458 Billion by 2030, with the current development. Cancer imposes a tremendous burden on low- and middle-income countries: 99% of the cancer patients in those countries die without pain treatment.

Cancer, as one major disease of the Non-communicable disease epidemic (killing 36 millionpeople annually, cancer killing ca. 8 million), can largely be prevented – especially those cancer diseases caused by alcohol use. WHO, World Bank and other acclaimed international bodies promote measures that are cost-effective and high-impact: ban alcohol marketing, increase the price of alcohol, for example through higher taxes, decrease the availability of alcohol, for example through limiting outlet density and reducing opening hours. 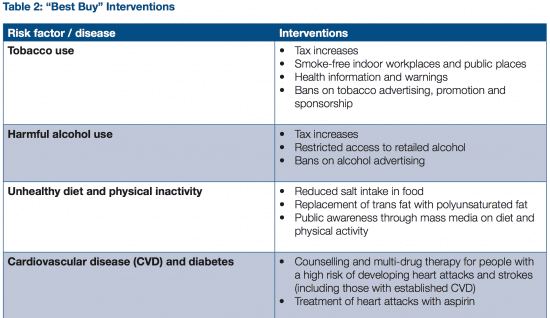 The rise of cancer worldwide is a major obstacle to human development and well-being. These new figures and projections send a strong signal that immediate action is needed to confront this human disaster, which touches every community worldwide, without exception,” stresses Dr Christopher Wild, Director of IARC and co-editor of the book

A lot of suffering can be prevented by simple, high-impact and cost effective policy measures, and so we urge decision-makers to make use of them for the benefit of children and families, societal development and economic prosperity.

The Guardian article on the global cancer surge

Our press release from 2013