On the occasion of the the 9th anniversary of the Alcohol Control Act in Thailand, it’s time to take stock: liquor businesses are still the champion in challenging the alcohol law with false advertisement, with price discounts, sales promotions, with selling alcohol to children under the age 20, with violating the time periods when alcohol sales are allowed, and with violating prohibited sales locations. This is a shocking and sad track record, especially since these violations can still be found numerously…

On the occasion of the the 9th anniversary of the Alcohol Control Act in Thailand, it’s time to take stock: liquor businesses are still the champion in challenging the alcohol law with false advertisement, with price discounts, sales promotions, with selling alcohol to children under the age 20, with violating the time periods when alcohol sales are allowed, and with violating prohibited sales locations. This is a shocking and sad track record, especially since these violations can still be found numerously.

Therefor, it’s still urgent to propose the strengthening of the law and improving the laws on sales bans concerning location and days.

The results of monitoring by civil society sector

Mr. Khamron Chudecha, Thailand Alcohol Watch, has been monitoring and complaining about the violations conducted by liquor businesses nationwide. Over a 9-month period between May 2016 and January 2017 Thailand Alcohol Watch has submitted 232 complaints about law violations with 42 cases being sent to relevant authorities and 11 cases were praising the performance of government agencies.

It has been noted that liquor businesses focused on large integrated marketing activities by advertising from campaigning events, promotions in restaurants all the way to relationships with the government, funds, and local political mechanism in organizing events with the claim being to provide revenue for public use.

It was also found that there were activities penetrating schools in the form of activities hidden in various courses,” said Mr Chudecha.

The role of government officers

The Office of Alcoholic Control Committee, Department of Disease Control, Ministry of Public Health (MOPH) has announced that Thai laws regulating alcohol will have been around for 9 years on February 14th.

An analysis of the state of the art shows improvements. For example, the rate of alcohol use has slightly gone down when compared with the past significant rise but the major concern is with the youth.

The purpose of the legislation is to organize and control the sale and marketing of alcohol, to be at the right time and in the right place.

Dr. Saman Futrakul, the Director of  Office of Alcoholic Control Committee said that the problems and barriers for the implementation of surveillance and law enforcement are as follows:

The direction to go in order to strengthen the alcohol control act is to increase the days and locations were alcohol consumption and sales are prohibited and to limit easy access for children and minors such as the sale of alcohol in the manner or method of direct sales to consumers or sales by any other means with buyer age being uncontrollable. 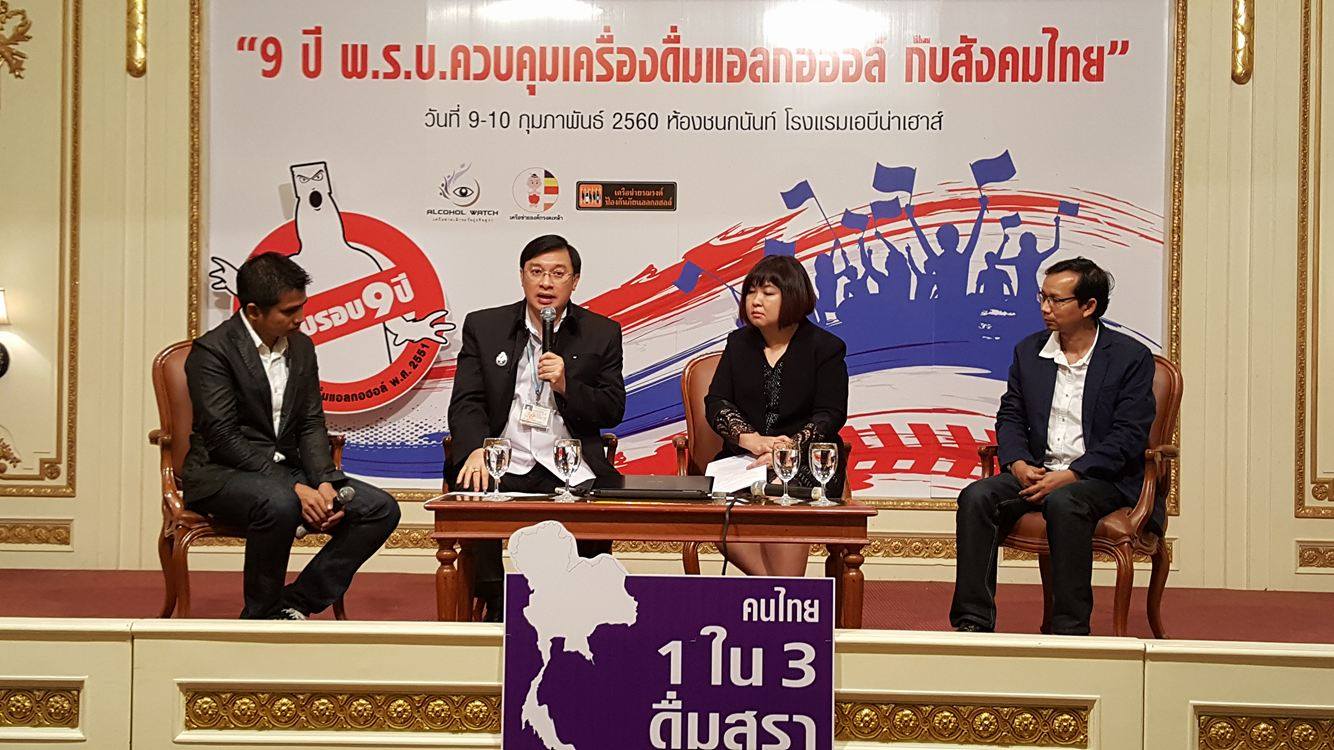 Dr. Nittha Runkasem has presented the results of monitoring alcohol marketing communications of the alcohol industry in 2016 by categorizing marketing activity as follows:

The alcohol businesses marketing trends in 2017 are as follows:

Big Alcohol is deliberately looking for gaps and loopholes in the law. The alcohol industry is also exploiting and abusing bureaucratic mechanisms by employing powerful lobby groups in marketing activities and public relations work. This way they seek to create pressure and buy silence to not enforce the law.

Businesses are asked to respect the law, practice good governance, and to not exploit societies in the 9th anniversary by intoxicating or arranging activities involving children, youths and education facilities, both directly and indirectly.

Additionally, the law enforcement mechanism should be used by provincial alcohol control committee including Bangkok and governmental officials should give priority to the enforcement of law and fully perform their duties under the law and to not be fooled by CSR activities organized by alcohol businesses.

Additionally, the public is asked to watch and file complaints about alcohol law violations to stop it before it starts.