I Call Time’s Up: Matt Damon Partners With Big Alcohol To Benefit “The Ladies”

by Kristina Sperkova Posted on January 25, 2018 in
Uncategorized

“Buy a lady a drink” is a perfect PR move to disguise all the negative impact of alcohol production and use. It legitimizes the questionable activities of alcohol producers. It also calls into question the seriousness and ultimate commitment to lasting change by philanthropists like Matt Damon…

Water is a human rights and development issue

Matt Damon has an alcohol problem… but it’s not what you think.

Water is the unsung hero of beer ingredients. It doesn’t get the recognition that the barley malt and hops get, but on average, beer consists of approximately 90% water. And just like any other ingredient, it affects the taste of the beer. That’s why it’s always filtered, tested and tasted before entering the brewing process.”

This is what AB InBev claims on their webpage under the description of their beer brewing process. Water is the unsung hero! The unsung hero in something that will become alcohol. Alcohol kills 3,3 million people a year and causes not only harm to the physical and mental health and well-being of the alcohol user but also the people around them, and society at large. Beyond the public health harm, alcohol also causes social and economic harm of enormous dimensions. And yet or exactly because of it, alcohol producers work actively to be associated with positive social causes such as providing access to clean water. That is how I imagine the campaign “Buy a lady a drink” was born.

Anyone who provides water for those in need is a hero. We cannot live without water. We know that. Access to water and sanitation is a human right, which entitles everyone to sufficient, safe, acceptable, physically accessible and affordable water for personal and domestic uses. Water is also included – and rightly so – in the Sustainable Development Goals (SDGs). SDG 6 stipulates to “ensure available and sustainable management of water and sanitation for all.”

Nevertheless, at this moment there are 844 million human beings around the world who have no access to safe water. That is why organizations like Matt Damon’s water.org seem to be needed. Water.org is a charity, co-founded by Matt Damon and Gary White, which seeks to empower people in 13 countries with access to safe water and sanitation in order to end the water crisis. To end the water crisis!

In their search for smart solutions, in 2015, water.org partnered with Stella Artois for the campaign “Buy a lady a drink”. To quote AB InBev (the owner of Stella Artois):

We are dedicated to enhancing water access and security for people across our markets (…) by mobilising a global movement for water access through our brands. One in 10 people live without access to safe water. The crisis disproportionately affects women and children, who collectively spend millions of hours a day gathering water instead of working, attending school or caring for their families.”

When buying a multipack, a bottle of Stella Artois or their chalice, water.org receives finances from Stella Artois for their work on ending the water crisis. So far 800,000 people have been provided access to safe water – the alcohol industry giant and water.org claim.

While claiming to attempt to help ending the water crisis through the collaboration of one brand (Stella Artois) of the world’s largest beer producer and water.org, this unholy partnership is in fact making the crisis worse.

AB InBev is fuelling the water crisis by brewing beer in countries that suffer from serious water shortages. If we just look at the 13 countries (Bangladesh, India, Indonesia, Philippines, Cambodia, Ethiopia, Ghana, Kenya, Tanzania, Uganda, Brazil, Honduras and Peru), where water.org operates and provides access to safe water, AB InBev has breweries in 9 of them.

Given the fact that the water footprint of beer production is horrible (producing 1l beer from barley costs 298 litres of water), simple maths shows that selling more beer to help end the water crisis is literally a dead end. The UN says that a human being needs 50 litres of water per day in order to drink, prepare meals and to have enough for personal hygiene.

The statement from their 2016 report does not show that AB InBev would plan to change their operations to stop contributing to the water crisis. Rather the opposite. ABInBev is gearing up for “new markets” (read the young, the women in developing countries) to be exploited, Africa being their number one target:

We are preparing for the growing importance of the African beer market by positioning our resources and key brands in the largest and fastest-growing markets there, including South Africa, East Africa and Nigeria and Ghana in West Africa… “

At this point, I am asking whether Matt Damon does not see their work is actually being sabotaged instead of supported by AB InBev? And of course it is not only about how much water is spend for beer production. It is about all the consequences of increased alcohol use.

I agree that spending hours on fetching water instead of studying, working and caring for families is a tremendous problem and immediate action by governments is needed. What strikes me is that the consequences of limited access to clean water are similar to those of alcohol consumption. For instance, we know that in vulnerable communities, the impact of alcohol abuse is reflected in neglected parental roles, wasted wages, ruined household economy, jobs lost, health worsened. All that means that the scarce resources cannot be invested in children’s primary education and school material. Their education is actually compromised due to alcohol harm in the family and community around them. And as we have seen, increased alcohol-related domestic violence, intimate partner violence and sexual assault increase additionally.

And yet… “Buy a lady a drink” obviously is an appropriate slogan in the eyes and ears of water.org. This discloses a shocking ignorance of the realities that affected and vulnerable populations have to struggle with every day. And it calls into question the seriousness of water.org in their work. How deeply do they analyse the impact of their work? How do they choose their partners?

The problems don’t stop there.

It is also about normalizing alcohol use in the countries where the majority of people abstains. Especially women. In the 13 countries, between 53% (Brazil) and 99.8% (Bangladesh) women did not use any alcohol in the last year. Now the message “Buy a lady a drink” normalises alcohol use among women and creates a positive relation with the Stella Artois brand.

Water.org is being used, not only to disguise the horrible water footprint of beer production, but also as a vehicle to bring a harmful product into the lives of people who are not even using alcohol. Stella is portrayed as someone who empowers women, brings them closer to equality and freedom. And yet… while ABInBev works to construct this image through one brand, it shows its real face in the promotions of its other products. The beer giant routinely and ruthlessly uses objectification and sexism as advertising tools such as this Brahma commercial or Budlight’s #UpForWhatever and their “Perfect beer to remove “no” from your vocabulary for the night”. 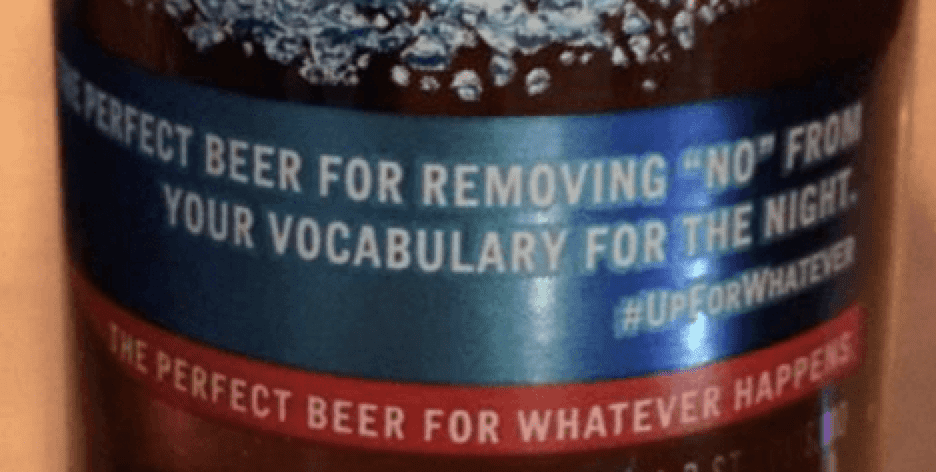 Around the world, it is women who often bear the heaviest burden of alcohol harm. Be it domestic violence, undermined household expenditures or absence of men in their homes to carry some of the load of bringing up children, taking care of the family and making ends meet. That’s why it is often women who disapprove men’s alcohol use and alcohol-related behavior and they take action – rally, demand change through new legislation or urge to improve enforcement of existing laws.

This unholy partnership between water.org and the world’s largest beer maker, in addition to the normalisation of alcohol use, is also attempting to construct a positive relation between women and beer. It is well known, that normalisation of an issue leads to the problem becoming depoliticised. Instead of discussing the best measures to prevent and reduce alcohol harm and this way improving women’s lives, the debate not only vanishes, but it also loses the voices that would bring it back.

“Buy a lady a drink” is a perfect PR move to disguise all the negative impact of alcohol production and use. It legitimizes the questionable activities of alcohol producers. It also calls into question the seriousness and ultimate commitment to lasting change by philanthropists like Matt Damon.

There are one million people killed by water related disease each year. I believe this misfortune and injustice is a highly motivating factor for Matt to act and try to help making the life of affected people and communities better. There are 3.3 million people killed by alcohol each year. In the end, beer is 90% water… And Matt Damon is helping to spoil this precious resource without knowing (I hope) and without realizing that his moves are counter-productive. I say time’s up, Matt Damon…